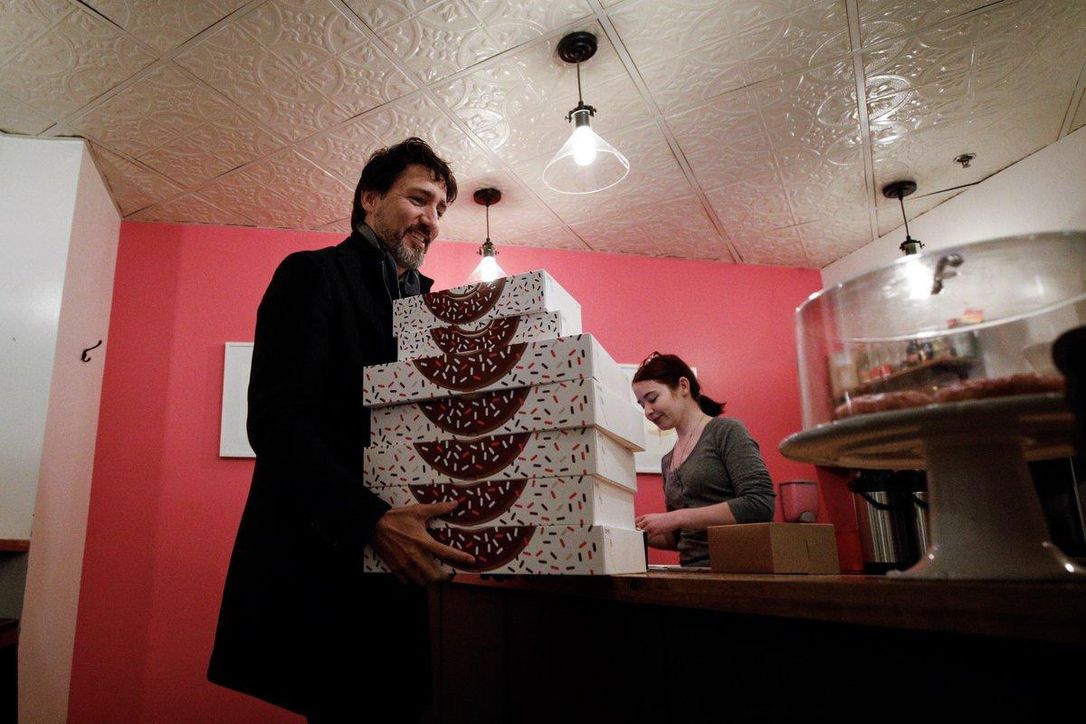 The Conservative Party – back when it knew how to win, and when it was preoccupied with winning more than whining – was pretty good at symbols.

Symbol-wise, ten years ago, the Conservatives’ communications strategy always came back a single theme: that Michael Ignatieff out-of-touch and from Mars – while their guy, Stephen Harper, was intimately familiar with the day-to-day reality of an average Canadian’s life, and was in fact just like the guy next door.  “Everything they do, every speech, every photo-op, every avail, everything they do every single day – it’s all aimed at making people feel Harper understands their life, and Iggy has never lived their life,” I said to some Iggy folks.

For example, I said, look at the Conservative regime’s laser-like focus on (the cherished Canadian sport) hockey – and (the cherished Canadian coffee and doughnut franchise) Tim Horton’s.  Harper seems to be obsessively preoccupied with both, even though he had been photographed furtively drinking Starbucks on the campaign trail, and no can recall ever seeing a photo of him in a pair of skates, ever.

“They’re political Everyman symbols,” I said, “and he’s brilliantly swiped both of them.  He’s an economist, for Chrissakes – he’s just as much of an intellectual as Ignatieff, but he’s terrified of people finding that out.  He wants our guy to be the brainy geek; he wants our guy to be the snob.  So he goes after Joe and Jane Frontporch with hockey and Tim’s, and it works.  Tim Horton’s hockey Dads, voters get.  Harvard human rights professors, who don’t do sports and who hangs out with other pinheads, they don’t get.”

None of this was new, or exceptionally insightful.  As early as 2007, smart folks were noticing how Harper was fixated on political symbols like hockey.  The progressive folks at Straight Goods, for instance, wrote back in 2007 that “hockey is an important part of the frame of Stephen Harper’s Conservatives.  Since [2004], Harper has strived to court for the vote of the urban working middle class – people earning under $50,000 in trades, service industries, small business or sales.  Establishing himself as a hockey-loving tough guy is intended to play to this demographic.”

To that end, Harper was frequently photographed cradling a cup of Tim Horton’s at hockey rinks, or chumming with National Hockey League all-stars.  He even let it be known that he was writing a book about hockey, even though I can’t remember if it ever came out.

None of this happens by accident.  Symbols aren’t part of politics – symbols are politics. Pierre Trudeau’s rose and pirouette; Jean Chretien’s Shawinigan handshake; Justin Trudeau’s baby-balancing and whatnot.

So, accordingly, I understand why many Conservatives dislike Justin Trudeau so much.  First, Trudeau is way better at symbols than them.  Way.  And, second, Trudeau swiped symbols from them.  It drives them crazy.

In their effort to get back at him, Cons overreact.  They see a beard, they start posting memes that his father was Fidel Castro.  They see him carrying doughnuts for his cabinet, and they actually go on websites to calculate (falsely) how much the doughnuts cost and (without proof) claim he expensed them.  They see him periodically without a wedding ring, and spin tales about the state of his marriage.  And so on.

I’m not saying political symbols don’t matter – they do, a lot.  It’s just that you shouldn’t be swinging at every damn symbol that comes along, like some latter-day Don Quixote.  You shouldn’t treat every photo op as a war crime.

Symbols matter, a lot.  But not everything is a symbol.