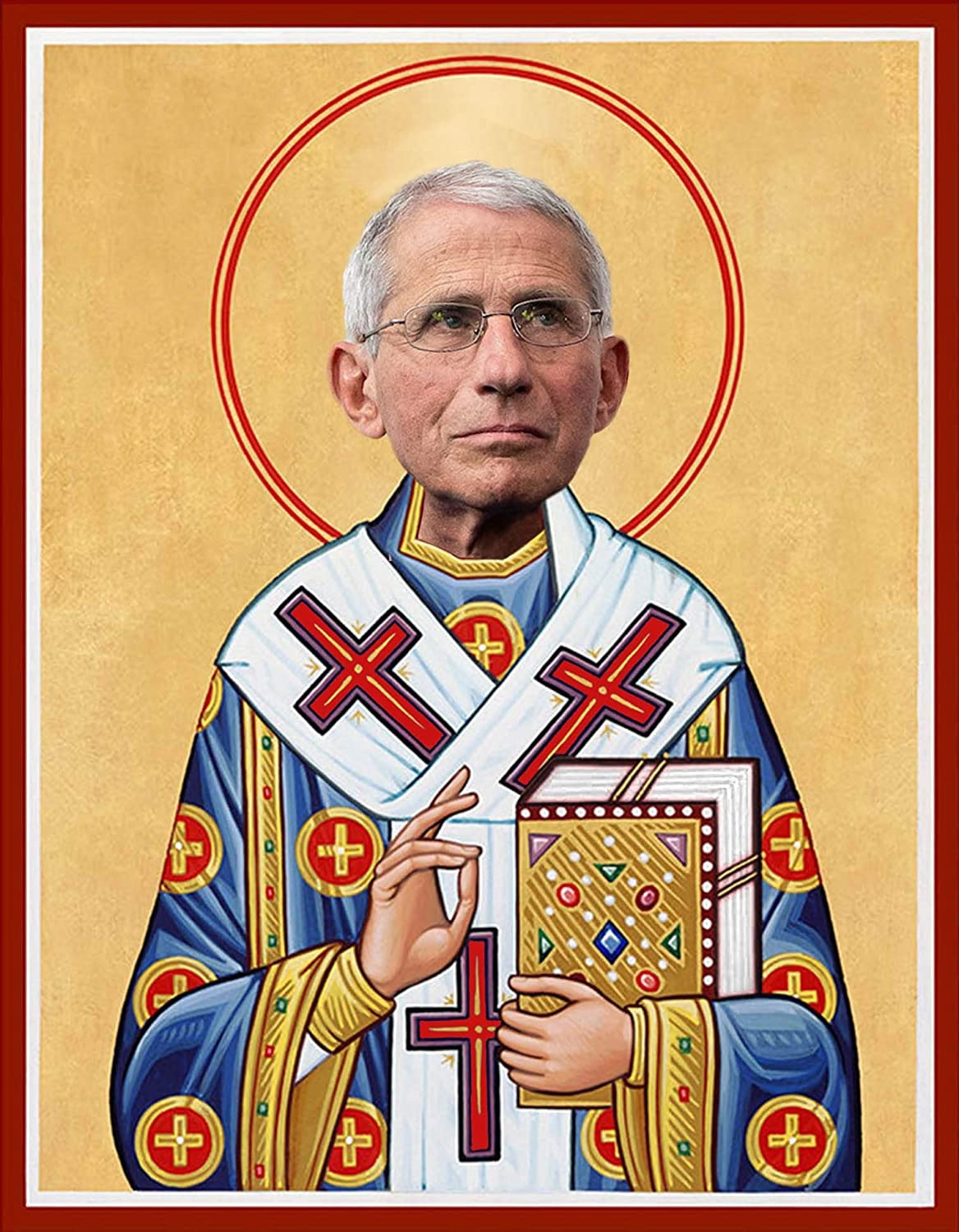 When you suspect you are being conned, and you’re not an expert, what do you do?

You go find an expert who tells the truth, that’s what.

Dr. Anthony Fauci is ours.

In my family, Dr. Fauci is regarded as a saint who hasn’t been beatified yet. He’s Catholic, like us, and was taught by Jesuits, like me. He was born to a family of modest means in Brooklyn, and went on to serve every U.S. president since Ronald Reagan. He’s now the chief medical advisor to President Joe Biden.

During the dark, grim early days of the pandemic, Fauci was the only one who seemed to be telling us the truth. Remember? Back then, Canada’s Minister of Health was demanding that Canadians stop wearing masks. Patty Hajdu was calling the virus “low risk” and dismissing any criticisms of China’s approach as “conspiracy theories.”

Back then, too, Donald Trump was declaring that the coronavirus “a hoax,” and – when it became apparent to all that it wasn’t – he suggested we should inject ourselves with bleach to kill the virus.

Trump, and his minions, despised Fauci. But Fauci told, and tells, the truth. He’s “America’s doctor,” as The New Yorker call him. But what he has to say is important for Canada, too. Especially this week.

This week, Canadian politicians and health officials started executing a slow-motion volte face – a flip-flop. This week – after telling us over and over, for months, that we need to meticulously follow the instructions of the vaccine manufacturers – those politicians and officials abruptly changed course.

After insisting that we all must get the second dose of the vaccine, and that we shouldn’t delay doing so, some politicians and health officials started to rewrite the truth. My Sun colleague Brian Lilley broke the news: “a number of provinces [are] looking to vaccinate more of their population by extending the time between first and second doses for those getting the Pfizer or Moderna vaccines.”

Wrote Lilley: “If the [federal] recommendation gives the blessing to all provinces to delay second doses, that could mean most of us vaccinated with at least one dose by Canada Day.”

For a nation languishing at around 60th spot globally for vaccinations (as we are, says Our World In Data), and for a nation with more than 70 per cent of us “angry” at the federal government (as we are, says the pollster Ipsos), all of this sure is convenient, isn’t it? For a Liberal Party eyeballing a June vote, getting everyone a potentially life-saving single jab sure would be politically-helpful, wouldn’t it?

Not so fast, says the truth-teller, Dr. Anthony Fauci.

Britain is now doing what Canada wants to do – delay the second dose. Quebec, meanwhile, isn’t even providing a second shot, Lilley reported.

“We’re telling people [two shots] is what you should do, and then we say, ‘Ooops, we changed our mind’?” Fauci told the Washington Post. “I think that would be a messaging challenge, to say the least.”

Delaying a second dose, as Justin Trudeau’s government clearly plans to do, has “risks,” Fauci says. In Forbes, Fauci said that approach wouldn’t work for America.

So why should it work for Canada? Why should we take what Dr. Fauci calls “a risk”?

Is it because what was once true is no longer true? Or is it because it will assist the Trudeau government in its re-election?

When in doubt, seek out a real expert. When uncertain, find a truth-teller.

Anthony Fauci is an expert truth-teller. Asked about delaying, or even denying, a second dose?

He says don’t do it.

[Kinsella is a former Chief of Staff to a federal Liberal Minister of Health.]

Leave a Reply to Yet Another Calgarian Cancel reply