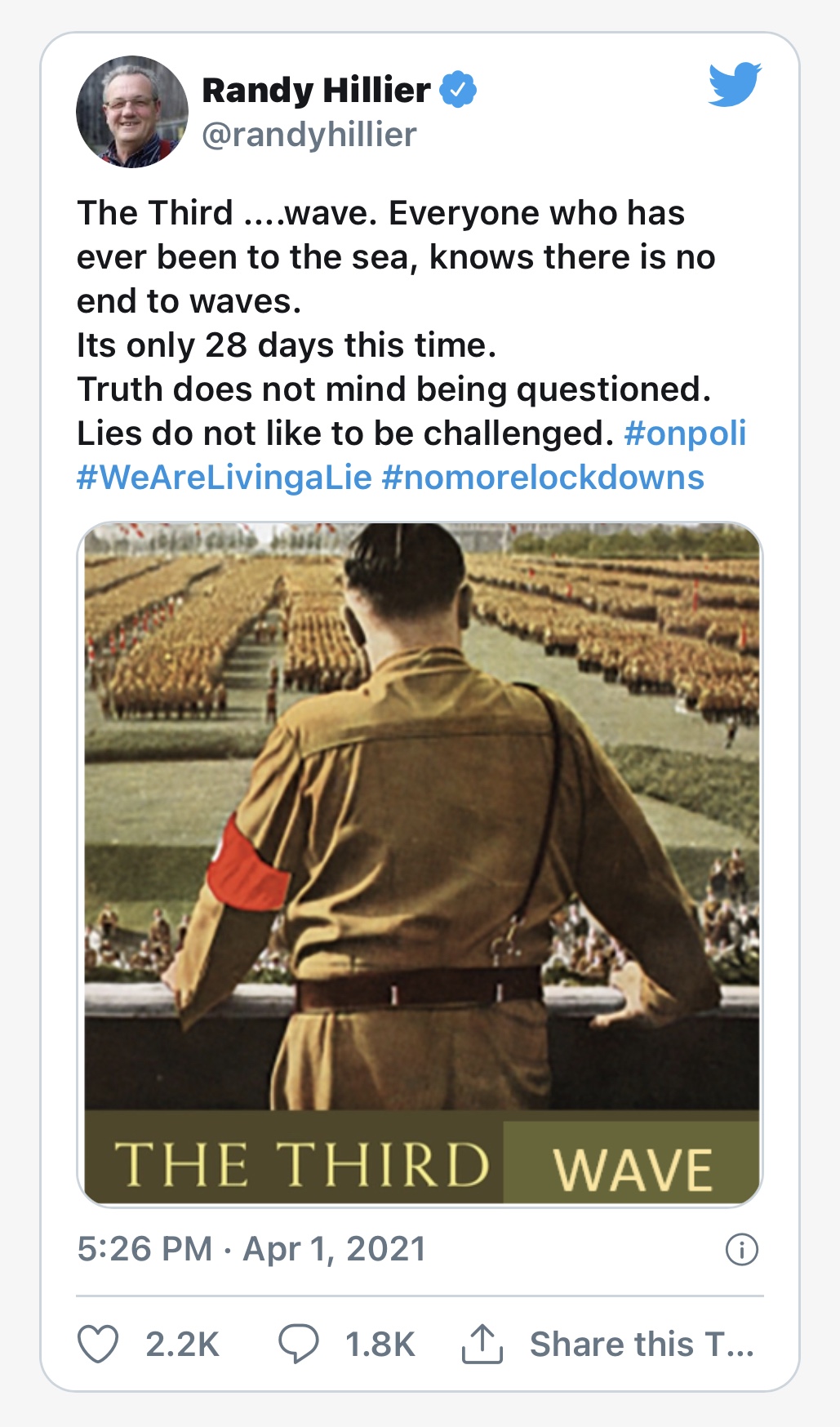 My latest: Hitler, Hillier and hate

What would Hitler do?

That’s what preoccupies Randy Hillier, apparently.  Hillier is a member of the Ontario legislature.  He doesn’t belong to any political party, because Doug Ford kicked him out of the Progressive Conservative caucus two years ago.

On Thursday, Hillier tweeted a picture of Adolf Hitler surveying a parade of Nazi troops, above the caption: THE THIRD WAVE.

Here’s what Hillier posted: “The Third ….wave. Everyone who has ever been to the sea, knows there is no end to waves. Its only 28 days this time. Truth does not mind being questioned. Lies do not like to be challenged. #onpoli #WeAreLivingaLie #nomorelockdowns”

Hillier is the MPP for Lanark-Frontenac-Kingston. He thinks the coronavirus is a hoax, a lie.

Hillier has been piloting the dark waters of the anti-mask, pandemic-denying lunatic fringe for about a year, now.  He’s held anti-mask rallies, and cheerfully posed maskless for pictures.  Along the way, he’s attracted the support of a gaggle of knuckle-dragging mouth-breathers who actually equate modest public health measures with fascism.

Hillier and his hillbillies don’t like lockdowns – and, as of Saturday, Canada’s largest province is again under one.  Premier Doug Ford said that the numbers – as reflected in the number of daily new infections, as well as hospitalizations – were heading in the wrong direction.  So, Ford said, it was time to apply an emergency brake.

Said Ford: “We are facing a serious situation and drastic measures are required to contain the rapid spread of the virus, especially the new variants of concern. I know pulling the emergency brake will be difficult on many people across the province, but we must try and prevent more people from getting infected and overwhelming our hospitals.”

That’s fine.  That’s democracy.  As my old boss Jean Chretien used to say, when the fringes on the Right and the Left are both mad at you, you’re winning.

But no one of significance has actually likened Ford’s lockdown to National Socialism.  Until now.

Alberta Premier Jason Kenney condemned it.  Tweeted Kenney: “There is – and should be – a vibrant debate about how best to deal with  the pandemic. But equating the public health measures of democratically elected and accountable governments to the genocidal anti-Semitism of the Nazi Third Reich is odious.”

Bernie Farber, the former head of the Canadian Jewish Congress, also expressed his outrage.  Said Farber: “The comparisons to Hitler re: Covid are obscene. That it would come from a member of the Ontario Legislature is truly detestable. He needs to be isolated by his constituents and voted out of office.”

But he and his cabal are acutely in need of some education, so let’s give it to him.  Because he’s got everything backwards.  So here, below, is a message to Randy Hillier.

Randy, Naziism – like the pandemic – is monstrous.  Like Naziism, the pandemic has rendered life dark and grinding and bleak.  Like Hitler and his murderous cult, it is the coronavirus that has killed and sickened millions.

Randy, the pandemic has stolen away jobs and livelihoods, just like Hitler did.  Like National Socialism, the virus has destroyed businesses and economies.

But our response to the coronavirus – as seen in the wearing of masks, and social distancing, and limiting public gatherings – doesn’t kill people.  It saves them, Randy.

Randy, it was wrong to equate what most of us are willingly doing to Adolf Hitler and Naziism. Because if Adolf Hitler was here today, Randy, we all know where he’d be, don’t we?

He’d be at one of your rallies, clapping.