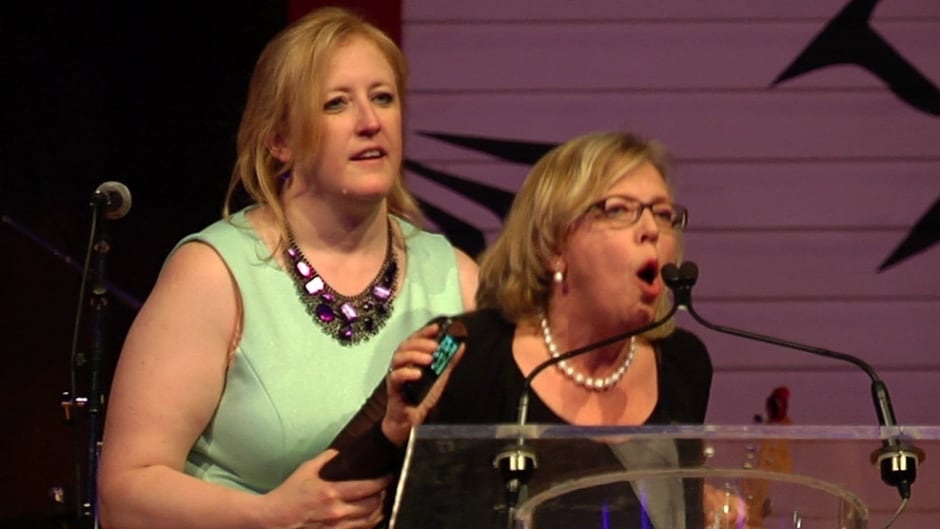 The job of the media is to come down from the hills to shoot the politically wounded.

So, let’s put a few rounds in the carcass of the Green Party, shall we?

Let’s start by telling a tale. But full disclosure first: My political consulting firm has acted for every single federal political party. All of them.

(One exception: We haven’t represented the political party led by Maxime Bernier, who was last seen wearing handcuffs in the backseat of an RCMP cruiser, arrested for violating Manitoba public health laws.)

But we’ve worked for everyone else. The Green Party included.

I first met with Elizabeth May, then the Green leader, in Ottawa in the summer of 2019. Some of her senior staff were there, too. We talked about my firm running the Green Party war room in the election.

May eyed me warily. “You make me a bit nervous,” she said.

Recalling that unfortunate time in 2015 when May appeared at a press gallery dinner (see photo above), I replied: “Likewise.”

Anyway, we agreed my firm would be hired. I warned her that, when that news leaked out — because everything leaks in Ottawa, eventually — it would attract controversy. She assured me that she could handle it.

Fast-forward to July 2019. May is at a pre-election rally in Guelph, and someone stands up to ask her a question about me. The questioner is distressed. She says I’m nasty (guilty) and she’s upset (good). In front of several hundred people, May insists she said this to me: “What you did in politics previously was despicable, and he said, ‘Yeah.’”

This wasn’t just false. It was a whopping whopper. It was fabulist fiction. It was a bald-faced lie.

I fired off an email to all of the senior Green staff who had been at the same meeting, gently reminding them I am a lawyer, and that I planned to publicly repudiate May unless she did so herself, govern yourself accordingly, etc.

May issued a grovelling tweet hours later, in which she whimpered that “some past campaigns had been despicable — not Warren.”

Long story short: A couple of my staff dealt with the Greens thereafter, but not me. I’m old enough to know a clown show when I see it.

Hamas starts firing rockets into Israel, and Israel properly acts in self-defence. The rest of the planet descends into paroxysms of “anti-Zionism” (read: Anti-Semitism). The Green Party joins in.

One of their MPs, a non-entity from New Brunswick, tweets that Israel is a state that practices “apartheid.” Last time I checked, “apartheid” is the whites-only system of laws promulgated by South Africa. Israel, meanwhile, has two million Arab citizens, some of whom are members of the national Knesset legislature, the civil service, the judiciary, and the army.

Anyway. The new Green leader — who is, as noted, Jewish and Black — declines to agree with the “apartheid” blood libel. The MP non-entity thereupon defects to the Trudeau Liberals, who the MP says share her “apartheid” defamation. Senior Greenies start demanding the new leader be fired for being moderate.

Elizabeth May, still regrettably an MP, is heard from. She chastises her successor, and says she wants the anti-Israel defector back.

Had enough? Me too. And I don’t think, anymore, that we need to come down from the hills and shoot the wounded Green Party people.

They’re pretty good at shooting themselves.