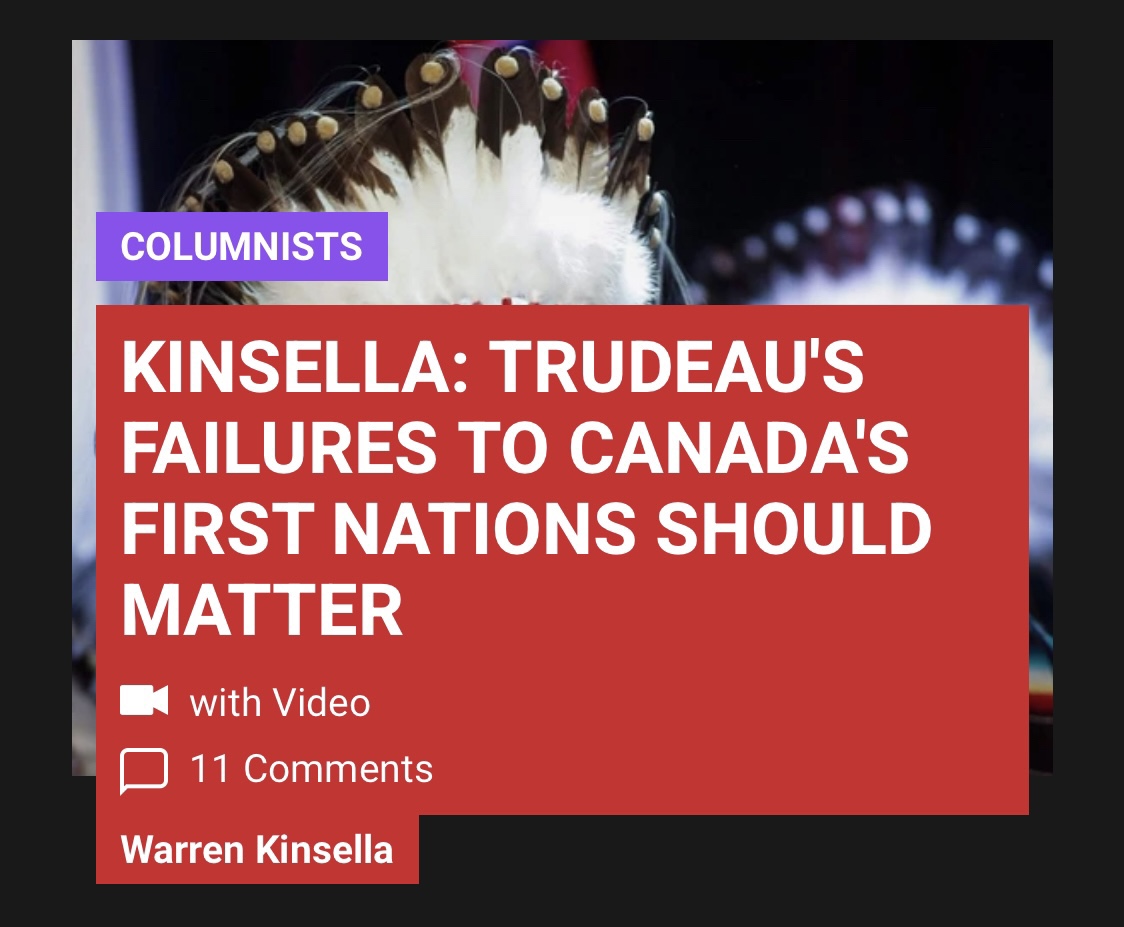 My latest: how will Indigenous voters vote?

Is there an Indigenous vote, and will they vote for Justin Trudeau?

It’s not an unimportant question.

With Justin Trudeau leading only a minority government — and with two dozen Liberal MPs having won in 2019 with only a few hundred votes — small constituencies can determine many political fates.

Five per cent of Canada’s population identify as Indigenous — close to two million people. First Nation, Inuit and Metis voters, age 18 and up, make up potentially a million voters.

That’s a lot of votes.

In the right places, that many votes can determine the outcome of the next election, expected later this year.

Not as many Indigenous people vote — certainly not as many as are entitled to.

As an Elections Canada study put it: “A significant number of Aboriginal [sic] people, as individuals and communities, still regard participation in non-Aboriginal elections or plebiscites as a threat to their unique rights, their autonomy and their goals of self-governance. Such persons hold a philosophical belief about the legitimacy of Aboriginal self-governance that differs fundamentally from that of the Canadian government.”

That’s one reason they don’t vote as much as they could, or should. Another reason: broken promises.

Justin Trudeau has broken many of the solemn promises he’s made to Indigenous people.

In his 2015 election platform, he promised to get clean water to Indigenous communities, and end the so-called boil water advisories.

He hasn’t done that. At all.

He promised to make their lives safer and better.

But, at places like Grassy Narrows, mercury still poisons the environment and the people who live there.

And when a diminutive woman protested that fact at an exclusive Liberal Party fundraiser, Trudeau had her ejected — and sneered: “Thanks for your donation.”

He promised to reconcile — in effect, build a more respectful relationship — with First Nations.

But he’s spent millions on lawyers to overturn a human rights award won by Indigenous children.

So, considering Justin Trudeau’s abject failure to reconcile with Indigenous people, and improve their lives, are they going to vote for him again?

They did in 2015: 40% voted Liberal then. However, after Trudeau politically mauled Jody Wilson Raybould in the SNC-Lavalin scandal, and exiled her from his party, that number plummeted to just 21 per cent in 2019.

So the Indigenous vote is not a monolith. They are not partisan sheep.

While they tend to vote Liberal more, there are plenty of Conservative and New Democrat indigenous voters.

Every party has had Members of Parliament drawn from indigenous communities, too.

Full disclosure: my firm has represented First Nation, Metis and Inuit groups for years, from coast to coast. I have learned, along the way, they are like any other constituency: they vote in their self-interest, as determined by economic, social and cultural realities.

So is voting for Justin Trudeau in their self interest? Indigenous people are best qualified to answer that important political question, and they will.

This writer suspects that the recent discovery of hundreds of bodies of Indigenous children and babies looms large in their thinking, just as it does for the rest of us.

They also know that, while the Liberal Party of Canada may talk a good game, the fundamentals haven’t really changed.

On the very day the more than 700 tiny Indigenous bodies were discovered in unmarked graves in Saskatchewan, Justin Trudeau shrugged.

He dismissed calls to fire his incompetent and tin-eared cabinet colleague, Carolyn Bennett, who had smeared Wilson Raybould, suggesting that the respected Indigenous leader was more concerned about money than her own people.

The Indigenous vote matters. It votes. Will it go with Justin Trudeau a third time?

Well, if results matter — and they do — they shouldn’t.