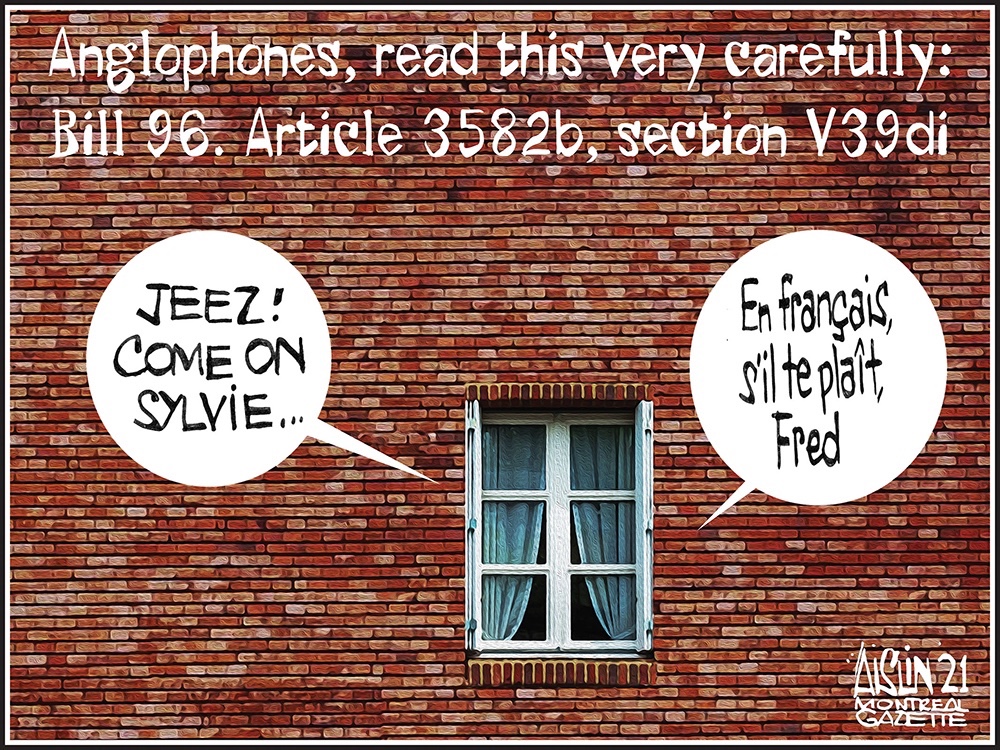 Nobody knows a lot about Martin Niemöller, probably, but they certainly know about the Lutheran pastor’s most famous statement.

You know it, too.

“Then they came for me — and there was no one left to speak for me.”

Niemöller’s truism goes back to 1946, and was about the cowardice of German clergy and academics as the conflagration of the Holocaust grew and grew, consuming millions of innocent lives.

But his words have been applied to many other injustices in the intervening years.

Because there have been too many other instances of repression and bigotry.

One such case of repression and bigotry is underway, right now, right here, in the province of Quebec.

In Quebec, two pieces of legislation have been conjured up by that province’s crypto-separatist regime, like a witches’ unholy spell.

One, Bill 21, targets what minorities wear.

The other, Bill 96, targets the language that minorities speak.

Using the bland Kafkaesque prose of government apparatchiks, the first one expresses hatred for Muslim women, mainly, and tells them what they can wear.

Using the same sort of bloodless idiom, the second one expresses hatred for English-speaking people.

It’s no surprise that Quebec’s intolerant government disgorged these two bills during the pandemic, when they knew the majority would be distracted by its own problems.

What is a surprise is that the son of Pierre Trudeau — and the leader of the party once led by the likes of Jean Chretien and Mike Pearson — would go along with Quebec’s evisceration of human rights in Canada.

Quoting the Charter of Rights and Freedoms to Quebeckers is a bit of a waste of time.

But their own Charter of Human Rights and Freedoms — which actually predates Canada’s, by almost a decade — is very important in Quebec. It’s a matter of pride.

And those two bills, 21 and 96, violate the Quebec Charter in 38 separate ways.

This week, this writer had the great honour of being on a panel with Clifford Lincoln, a former Quebec MNA and a fierce fighter for Canada.

No longer as young as he used to be, the intensity of Lincoln’s passion for human rights — and Canada — were undimmed.

Speaking to the Quebec Community Groups Network conference, Lincoln noted that no less than Nelson Mandela said that the majority always owe a debt to the minority. And that the strong owe a debt to those who are not as strong.

Where, then, are those who would defend minorities in Quebec? Where are the rest of us? Why are not more Canadians speaking up?

There is plenty of reason to do so. Bill 96 actually gives the French language police the power to seize and break into people’s personal phones – to see if they are speaking enough French. And Bill 21 actually goes after Muslim women who wear a simple veil – or Jews who wear a Star of David – when they work in government.

It is not an exaggeration to say that Canada is being unravelled, quietly, right now in the province of Quebec.

Our “leaders” in Ottawa are silent. They’re eunuchs.

But where are the rest of us? Why aren’t other Canadians also raising their voices in protest?

Because history shows one unvarnished truth:

When they come for me, they may someday also come for thee.