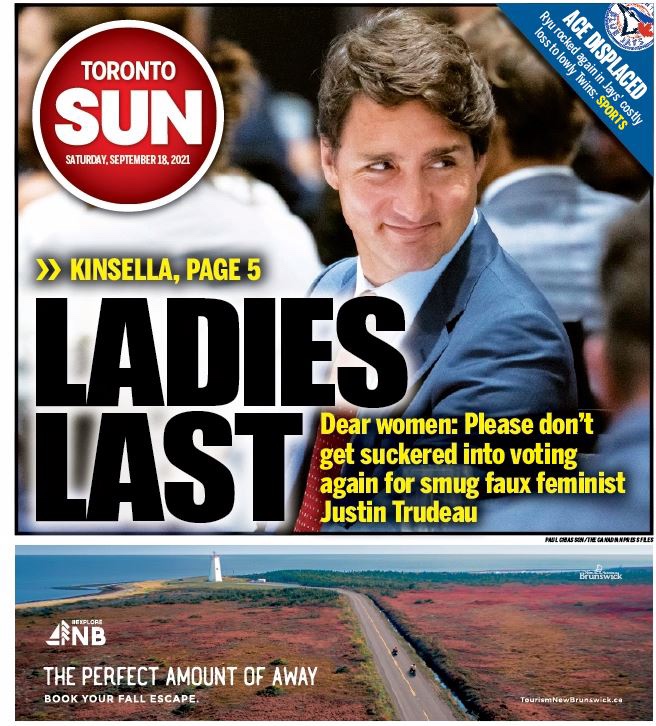 My latest: an open letter to Canadian women

Yes.  This is a guy writing an open letter to you on the weekend before the big vote.  I’m a man, with all of a man’s (many, many) faults.

I am writing to you because, if it wasn’t for you, Justin Trudeau would have been a historical footnote by now. Sorry, but it’s a fact. Without your support in 2015 and 2019, the Liberal leader would have been consigned to memory long ago.

He wasn’t.  He won, and won again.  Mainly because women stuck with him.  Men didn’t.

Was it because he claimed, repeatedly, to be a feminist?

Personally, I’ve never believed a man should ever, ever say he’s a feminist. That’s a coveted designation that women, alone, are entitled to hand out. Not men, and certainly not men talking about themselves.

Best case, men can and should be allies to women – for equality in and out of the workplace, for reproductive rights, for everything, really.

But a man calling himself a feminist? That’s arrogant. And when a man gropes a reporter at a beer festival – as Trudeau did, according to a female reporter whose allegations were never refuted – he’s worse than arrogant.

On the #MeToo movement, too, Justin Trudeau claimed to be onside.  All dewy-eyed, he said he believed in #MeToo, and it again seems like not a few Canadian women believed him.

Personally, I am generally pretty unenthusiastic about hashtag campaigns. Most of the time, they are just slacktivism.  You know: the false belief that posting something on social media is enough. It isn’t.

And, most of the male responses to #MeToo have been completely idiotic. Stuff like: I have daughters, and now I understand, etc. Or: Sure, but don’t blame me, etc.

Mostly, I resisted writing or saying anything about #MeToo because I felt men should just shut up and listen, for once. But Justin Trudeau couldn’t. He can’t help himself.

So, when asked about #meToo by Paul Wells of Maclean’s in 2018, Trudeau solemnly declared: “There is a massive shift going on in our society and our workplaces and important conversations that are really, really overdue.”

But when Wells referenced the groping incident, Trudeau didn’t deny it. He just smirked.

But then the grim, gritty reality intervenes.  Over and over and over.

Examples of that ugly reality abound: knowing about the General Jonathan Vance sexual harassment allegations – but claiming, with a straight face, that he didn’t know they were about sexual harassment.

Knowing about allegations of sexual harassment and assault by Liberal MP Marwan Tabbara – and allowing him to run anyway.

Knowing about recent examples, too. Such as: a member of Trudeau’s Liberal caucus had been the subject of multiple complaints of sexual misconduct – and one of the complainants actually attempted suicide in the MP’s office.

Trudeau’s response? He said he believed the MP.  Later on, the MP resigned his campaign – but his name is still on the ballot.

Then, this week, yet another one: Kevin Vuong, the Liberal candidate in Ontario’s Spadina-Fort York, was revealed to have been charged with sexual assault in 2019 (no trial took place because the alleged victim could not participate in the prosecution, the Toronto Star reported).

Trudeau’s reaction? He smirked, again. And he refused to rule out permitting Vuong to join the Liberal caucus, should he win on Monday.

It goes on and on and on.  Justin Trudeau says he is a feminist.  But does act like one?

He says he believes in #MeToo.  But does he, really?

No, no, no.  And you know it, female Canadian voters.  You know it.

Time to act on it.