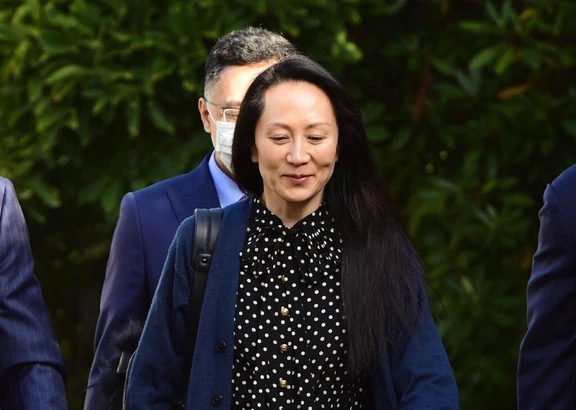 My latest: she’s free. They needed to be free before now.

The two Michaels, who didn’t, remained imprisoned until tonight.

Welcome to justice in the Justin Trudeau era: the guilty win, and the innocent lose.

It all happened yesterday, a Friday afternoon, which is typically when governments do the dirtiest deeds, in the hope that fewer will notice. But we noticed.

Here’s what happened: as this newspaper has previously reported, Huawei Technologies Chief Financial Officer Meng Wanzhou was facing prosecution for bank and wire fraud charges in the United States — for allegedly lying about Huawei’s business dealings in Iran.

She was detained at Vancouver’s airport in 2018, at the request of American authorities, and was facing extradition to the U.S. And she’s been fighting extradition ever since.

Huawei, meanwhile, was charged by the Americans with operating as a criminal enterprise, stealing trade secrets and defrauding financial institutions. It has pleaded not guilty and still faces prosecution.

But Meng Wanzhou isn’t anymore. U.S. Justice Department officials reached a deferred prosecution agreement on Friday afternoon with Meng Wanzhou that freed her from house arrest in Canada and enabled her to jet back home to China.

It was, the Washington Post dryly noted, “a major development in an ongoing investigation that could have geopolitical implications.”

It sure could. But not, apparently, for Canadians Michael Spavor and Michael Kovrig, who were illegally imprisoned in China on bogus charges of espionage for more than 1,020 days.

Spavor and Kovrig — whose family members allege have faced torture — remained behind bars. Any attempts by the government of Justin Trudeau to secure their freedom had failed, utterly.

Pointing out that the Trudeau regime is useless internationally isn’t really front-page news, of course. Trudeau’s efforts internationally have been a laundry list of abject failure: he failed to get a seat on the United Nations security council.

He failed to boost foreign investment in Canada. He failed to rebuild our reputation as peacekeepers in international hotspots. Internationally, Trudeau has led Canada to defeat after defeat.

The Meng Wanzhou deferred prosecution agreement is yet more evidence of that. How in God’s name can she be permitted to go free, and the two Michaels weren’t before now? How could Trudeau permit the Joe Biden administration to cook up such a deal without addressing the plight of our own citizens before now?

Under the so-called deferred prosecution deal, federal prosecutors agreed to defer — and then ultimately drop — the charges against Meng.

To anyone who has followed this sordid affair, it has been obvious that the imprisonment of the two very innocent Michaels was China’s petulant and illegal response to the detention of Meng Wanzhou — even though Meng’s “detention” was mere house arrest and included plenty of posh shopping sprees and high-end jaunts around British Columbia’s Lower Mainland.

Trudeau, now returned to power with a mere minority, was immediately under more pressure than ever before to secure the freedom of Michael Spavor and Michael Kovrig. The single largest roadblock to their release had been removed.

Would Trudeau try? Would he be successful?

Joe Biden was. The two Michaels are coming home because of him. Not Justin Trudeau.