Half favour Grit NDP co operation but no consensus on how: Poll
Source: The Canadian Press
Jun 8, 2010 13:09
By Joan Bryden

OTTAWA, Ont. – A new poll suggests more than half of Canadians favour some sort of co-operation between the federal Liberals and New Democrats.

But The Canadian Press-Harris Decima survey indicates there’s no consensus on what form that co-operation should take.

Twenty-eight per cent of those surveyed favoured a non-compete pact between the two parties, wherein they would agree not to run candidates against each other in some ridings across the country.

Fourteen per cent favoured a Liberal-NDP coalition government after the next election, while 13 per cent said they’d prefer an outright merger of the two parties prior to the election.

Another 30 per cent – including 50 per cent of Conservative supporters – said they would rather that the two parties not co-operate at all. [Conservatives fear losing: stop the presses, etc. – Ed.]

The telephone survey of just over 1,000 Canadians was conducted June 3-6 and is considered accurate within 3.1 percentage points, 19 times in 20.

The poll comes amid a resurgence of interest among Liberals about finding some way co-operate with the NDP. Interest has been fuelled by tepid poll numbers and the recent installation of a Conservative-Liberal Democrat coalition government in Britain.

A number of Liberal luminaries – including former prime minister Jean Chretien – have mused about the merits of combining Liberal and NDP forces to defeat Prime Minister Stephen Harper’s Conservatives.

UPDATE: And I did an interview with the nice young guys at The Mark about the subject. CBC’s The National tonight, too. Wish I’d had this poll beforehand!

UPDATE: This is sure interesting.

Harper’s take: for your sake, brake the fake lake quake, or I’ll bake a cake for your wake. 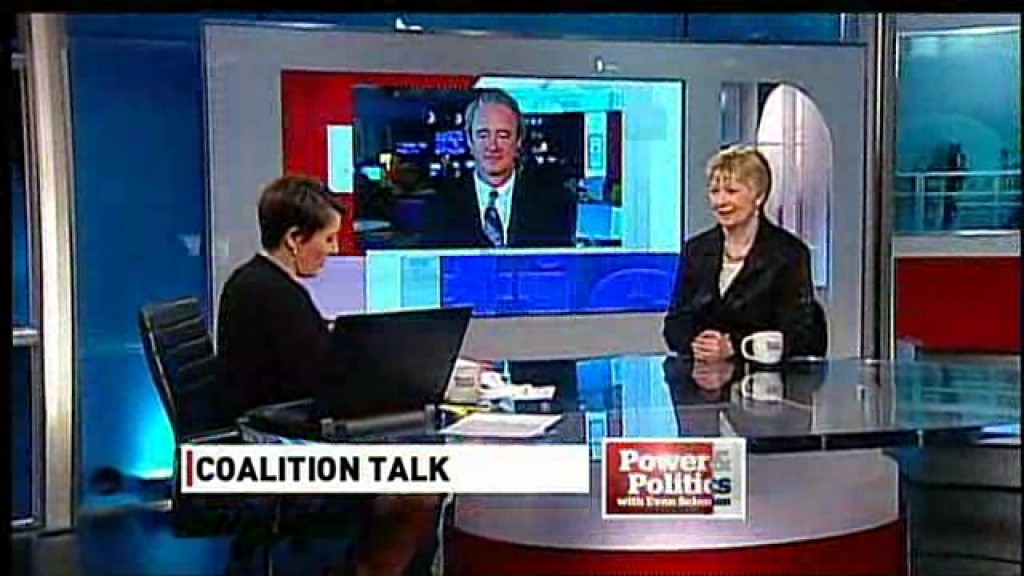 Rosie and Anne attempt to ignore strange person watching them through window.
Linkage here, at about 1:13 mark.

A few folks have asked me if they could eyeball last night’s Power and Politics clippage, wherein me and the NDP’s Anne McGrath mooted coalition stuff.

Beats me, said I.  Anyone know how to obtain same from the CBC’s insanely-dense web site?

UPDATE: Thanks to Wendy and others for the feedback! Clip is now posted above.

I forgot I was clipped on The Current this morning.  You can listen here. (I love the “that gentleman” bit – I laughed out loud, in fact.)

Also, I’m on P&P with Rosie Barton and the NDP’s Anne McGrath this evening.  You can guess what the subject-matter might be.

HT: Conservatives acknowledge unification of parties on left could be ‘formidable force’

“[Conservative strategist Tim]Powers said, however, that’s there’s no question a unification of the federal parties on the left could be a “formidable force.”

An Angus Reid poll released last week revealed that a Liberal-NDP coalition led by Mr. Ignatieff would be defeated by Mr. Harper in an election campaign, 40-34 per cent. If the new entity was led by Grit MP Bob Rae (Toronto Centre, Ont.) it would be tied in public support, and if NDP Leader Jack Layton (Toronto-Dunforth, Ont.) was the leader it would defeat the Conservatives 43-37 per cent.

UPDATE: Wells on it, here. Always worth a gander.

Monday morning bits and pieces from the NYT – and an extra!

My kids and I all adore Rise Against – but it was my sons who introduced me to ‘Hero of War.’ I think I’ve posted this before, but it never ceases to be powerful. Or salient.

We woke at the cabin to near-freezing temperatures, this morning, and also plenty of rain. Will make a run for it when things die down a bit.

Also woke to morning headlines suggesting that the Reformatory leader is now “licking his lips” about a Liberal-NDP get-together – and the Liberal leader pouring coldish water on merging.

I don’t suppose that the former could say a Liberal-Democrat Party actually worries him – just as the latter can’t simply say he’s now worried enough to embrace it. Both men are saying what they can only say, given the circumstances.

Meanwhile, me – and those like me – may be completely wrong. One thing is a fact, however: if the Grits drop much more below that 25 per cent floor, their rank-and-file will be transformed into an army of pro-coalition missionaries.

But if the Libs wait that long, of course, the NDP won’t be in the mood to be converted to the coalition cause. And that’ll likely be right around the time you start to read stories and columns about the Dippers’ ambitious re-decoration plans for 409-S.

Man oh man, the weather is nasty out there, isn’t it?

Personally, I always want Chretien to come back

Here, however, Jim Travesty sets up the biggest straw man ever so that he can try to knock it down, and thereby meet his Saturday column obligations.

What a load of bollocks. But, that said, it sure would be awesome, wouldn’t it?

We’d dispatch the Reformatories in a single afternoon.