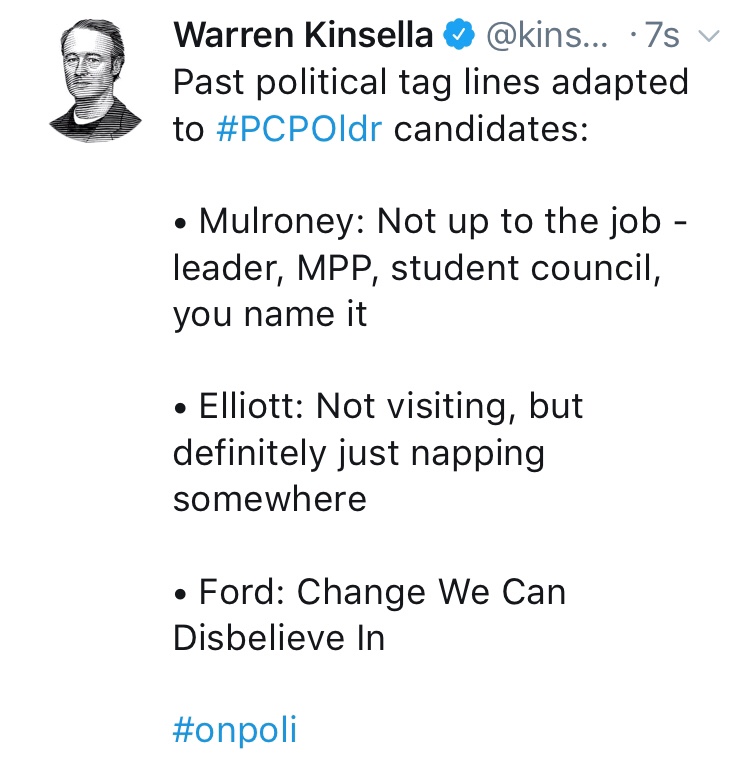 • Andrew Horwath’s New Democrats have been in a witness protection program for months – and, when they finally start to show signs of life, they lose their Chief of Staff to allegations he was indifferent to complaints about sexual harassment

• Caroline Mulroney is revealing herself to be completely unprepared for the top job – she looks and sounds uncertain, she’s nervous and she’s clearly out of her depth – and increasing numbers of worried PCs are saying Wynne would eat her alive in a leader’s debate

• Christine Elliott is doing again what she did in 2009 and 2015 – she’s phoning it in, and giving an entirely new dimension to the Trumpian epithet, “low energy”

• Doug Ford is amazing and charming PCs everywhere – he’s being disciplined, strategic and working his tail off – but he’d still be easy for the Libs to demonize in a province-wide vote

• Oh, and for good measure, the last thing the PCs needed – for Patrick Brown to start doing the rounds in the media, and demonizing those young women who came forward – is, incredibly, actually happening

At this point, I am hearing from many, many senior and experienced Progressive Conservatives that Doug Ford may well win this thing. Incredible, I know, but he is doing what he should be doing: working. Elliot simply isn’t – and Mulroney is decidedly not up to the job.

Like I say: Kathleen Wynne is the luckiest politician alive.

Is Ms. Mulroney a lawyer? (With shocking update! And important question!)

She has said in multiple interviews that she is.

Fine.  But then there’s this:

She practiced 13 months, apparently, then stopped.

I know that if you don’t pay your fees in Ontario, where I am called, you can get suspended.  Other provinces are mostly the same.

But can you still call yourself a “lawyer” if you aren’t paying the relevant regulatory body the fees when every other lawyer does?

P.S. “Lawyer” or no, being called to the New York State bar is really, really hard, by the by.

SHOCKER UPDATE: She’s been re-instated! Her people saw it coming!  New spin:  SHE’S BEEN SECRETLY RUNNING FOR THE LEADERSHIP FOR TWO YEARS!

OH AND THIS QUERY: Why would she quietly re-instate as a New York State lawyer in THE SAME WEEK she became the PC candidate in Ontario?