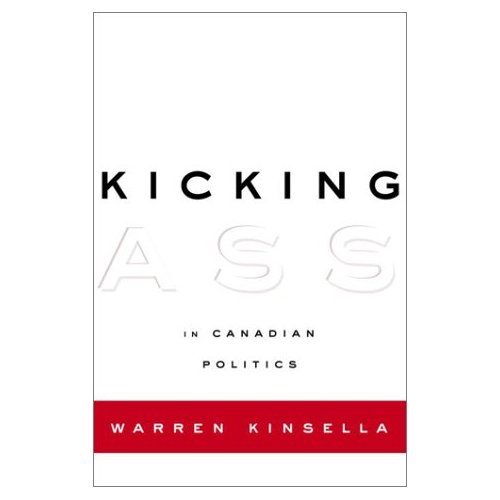 Warren Kinsella is the author of Kicking Ass in Canadian Politics, which sold as well as you might expect for a book released on September 11, 2001.

Excerpt: “Political reporters, as evil as they may seem to everyone here, are not an entirely bad. The majority will forgive a candidate’s minor errors, as long as the flubs aren’t happening every other minute. But God help the politician who makes an error of fact that is, well, funny. Reporters love to laugh at politicians, and so do voters.

So press accounts of Dan Quayle’s June 1992 visit to an elementary school in Trenton, New Jersey, should be required reading for anyone seeking public office. Sitting next to twelve-year-old William Figueroa to help him with his studies – while a horde of television cameras recorded the exchange – the U.S. Vice President made a big-o mistake-o. Young William had gone to the board to spell the word potato, which he did, correctly. Young Dan instructed William to add the letter “e” to the end of the word. Published accounts note that the assembled press in the classroom grew very, very quiet, like hunters do just before they are about to shoot some big, stupid beast in the woods.

The next day, William Figueroa threw more dirt on Quayle’s political coffin at a press conference, where the grade-schooler pointed out that the Vice President seemed like a nice guy, but he “needed to study more.” Indeed.”

Warren Kinsella is Canada’s own “Prince of Darkness.” From the moment he was recruited to help the Liberals in the campaign to unseat Kim Campbell in 1993, Kinsella became an enthusiastic advocate of tough, in-your-face politics – politics that infuriates opponents, but wins votes. Just last November, the national media reported that his style and tactics were crucial to the campaign that won Prime Minister Jean Chrï¿½ien his third term and an unprecedented majority in the House of Commons. Now, for the first time, Kinsella lifts the veil on what really goes on inside campaigns – and it’s not pretty. This is the good, the bad and the ugly of partisan politics, and Kinsella argues that all three are necessary for a healthy and democratic political dialogue.

But this isn’t a cynic’s book on how to manipulate the voting public. The advice from the Prince of Darkness is “stay on message, and stick with the truth.” Those practitioners of the black arts who resort to lies and cheating are most often burned at the stake by the voters. And he marshals plenty of evidence and insider stories from the hottest campaigns and campaigners in Canada and the United States – among them, James Carville, Betsey Wright, Haley Barbour and Dick Morris – to prove his point.

You’ll learn about push-polling, frugging, ratf**king, quick response, dirty tricks and oppo, and you’ll learn how to counter them all. You’ll be treated to Kinsella’s Twelve Handy Tips for Surviving Encounters with Unethical, Unscrupulous, Unprincipled Political Journalists, as well as to his unique rating system on whose political reporting you can trust.

This is a must-read not only for political junkies but also for marketers and PR flaks alike: it is a handbook, not only on how to win, but how to make sure your opponent loses.

“…highly readable…As many see it, the Alliance’s slide into oblivion hit the point of no return when the toe of Warren Kinsella’s shoe made contact with Stockwell Day’s rump.”—National Post