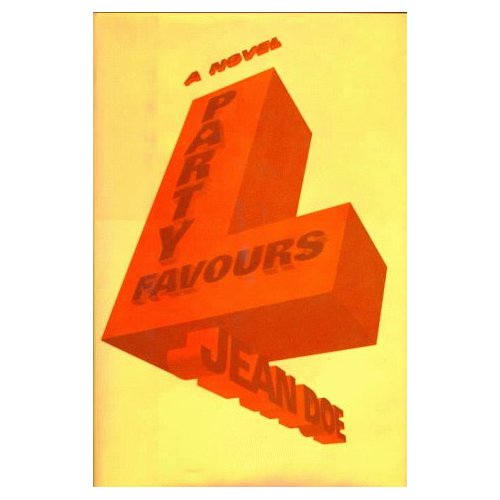 Warren Kinsella is the author(!) of Party Favours, published by HarperCollins in 1997. Party Favours briefly flitted onto various best-seller lists, like a beautiful, inoffensive little butterfly. It then met a harsh and lonely death, as all butterflies do.

Excerpt: “Ottawa is an unhappy, unpleasant little place, where a lot gets said and little gets done. Although it aspires to be much more, it isn’t ever going to be more than that: a former lumber town, packed with hundreds of megalomaniacs essentially lacking in souls….I had come to Ottawa with the belief that the good guys and the bad guys were readily distinguishable, and that my job would be to chronicle the achievements of the former, and the misdeeds of the latter. But it hadn’t worked out that way.”

Now it can be revealed to a breathless nation, none of whom suspected it in the least: Warren was Jean Doe! Shock! Horror! In 1997, over a few weekends, Warren wrote a novel (his first and, hopefully, last) called Party Favours. It told the tale of an ambitious Liberal Finance Minister, scheming to overthrow a democratically-elected Liberal Prime Minister. It was a moderate best-seller, but not for long! Far-sighted critics like Warren’s friends Paul Wells and Susan Delacourt lined up to be the first to beat the stuffing out of the well-meaning little roman a clef. A Liberal PM facing a coup led by one of his own cabinet ministers, snorted these high-priced nattering nabobs of negativity. What an absurd plot! What an implausible story! Er…whatever you say, folks.

The Globe and Mail called it “frothy,” as we recall, and Clare Hoy liked it a lot, but that is never something to brag about. Buy it if you dare, and ask yourself: does art (even poorly-executed art) really imitate life? In Ottawa, bien sur.