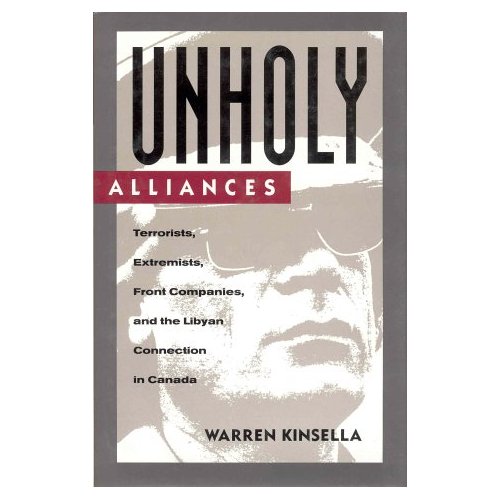 Warren Kinsella is the author of ‘Unholy Alliances: Terrorists, Extremists, Front Companies and the Libyan Connection in Canada.’ It was published by Lester in 1992.

Excerpt: “According to Libyan officials, it was around 6:10 a.m. that Southam News journalist Christoph Halens landed on the grey patio tiles two metres to the left of the entrance to Tripoli’s Zanzour Tourist Village…Halens had landed on his back, a short distance from the grimy walls of the sprawling three-storey hotel. There was silence. A strong wind was blowing across the Gulf of Sidra, and out into the Mediterranean. Above the parking lot, not far from Halens, a soggy banner read: IMPERIALIST TERRORISM YIELDS ANTI-TERRORISM… A member of the hotel’s night staff found the journalist’s body at 6:25 a.m. Halens was wearing a clean shirt, a sleeveless pullover, and a windbreaker. His eyes were open and a large pool of blood was forming behind his head… Gone was the notebook he had been carrying with him for two days-the notebook he had crammed with bits and pieces of a story about neo-Nazis, and militant leftists, and Libyans living in North America… Gone was the story Christoph Halens had died for.”