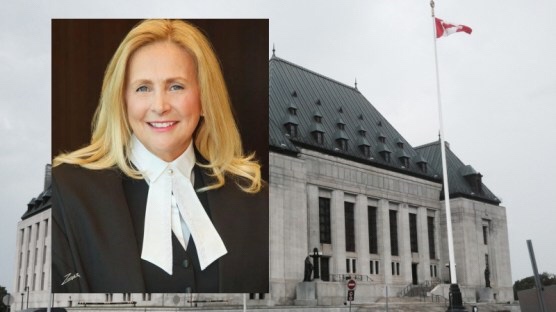 When this writer started typing up what would become the novel Recipe For Hate, several things were not anticipated. ‎Positive reviews, for example: not used to those. But then Publisher’s Weekly went and called it “riveting, an unflinching page-turner” – and Apple IBooks called it a “book of the month.”

‎Not expected, at all.

Also completely unexpected: one of the book’s major characters getting named to the highest court in the land.

But that happened, too. Seriously.  Let me tell you all about it.

Last week, Justice Sheilah Martin was elevated by the Prime Minister to fill a coming vacancy on the Supreme Court‎ of Canada. The announcement was greeted with near-universal acclaim.

This writer greeted it with shock.

Here’s why: way back at the beginning of time – before Al Gore invented the Internet and President PissTape was still busy chasing coeds and going bankrupt a lot – this writer was a first-year law student at the University of Calgary‎. More hair, less waist, boundless horizons, etc.

Day One. In walks our contracts law prof: not too tall, youngish, actually quite beautiful. Nice. Name: Sheilah Martin.

She was born in Montreal (like this writer) and had ‎somehow ended up in Cowtown and loved it (ditto).

And: she was smart. As in, really, really smart. Scary smart. Genius smart. Take-your-breath-away smart.

She didn’t suffer fools gladly, and this writer was indisputably one. She gave me the worst mark I’d ever gotten, anywhere, ever – and it taught me a lesson I never forgot.

Another time: she eyeballed my split lip‎ one Monday – the product of a fight with a couple mountian-sized Armed Forces guys at a Calgary bar on Saturday night , both of whom later bought me a beer – and shook her head. “Don’t be an idiot, Kinsella,” she said. ‎”Grow up.” (Never did. Sorry, Prof. Martin).

I, like most of my classmates, tried to impress her. We worked harder. We paid attention. We persevered.

Did she change my life? No, she didn’t. But she changed the way I thought about things, which actually matters a lot more. When you think about it.

I graduated. Headed East, didn’t stay in touch. I heard she’d started to practice constitutional and criminal law. Heard she got elevated to the bench. She got to the Court of Queen’s Bench, even – moved up when Stephen Harper was PM. Was proud of her. Admired her, from afar.

She was this: she was one of those people you meet in your life who measurably changes you. Who makes you better. Who you remember, always, because she altered the course you took.

Thirty years later: the book. A novel, about some progressive punk rockers confronting neo-Nazis and white supremacists who ‎have insinuated their way into positions of power. There’s murder, and mayhem, and mystery.

There’s also Sheila Martin. She’s in there, and she’s a major character in Recipe For Hate. She’s one of the book’s few heroes, in fact.

I won’t be appearing before the Supremes anytime soon, so I doubt I will be able to thank her for changing me – for the better – in person.

So, the book will have to do.

Send a clerk over to Prospero Books on Bank Street, Madame Justice Martin, and you’re right there, starting at Chapter 35 and in the pages that follow.

Sharon Martin is described therein as brilliant, and ethical, and a kick-ass lawyer.

The real-life one is, too.