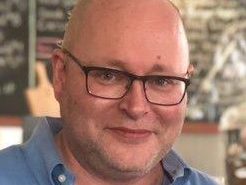 My friend Mike Sloan, in the Sun

Every year, thousands of Canadians hear this from their doctors. It’s frightening, confusing, and outright scary. In February, it was my turn.

A myriad of options were offered. We can radiate this. We can do chemotherapy. All, in the hope of extending my life.

We live in a world where many cancers are highly treatable, and the hope for recovery is high. We are, and should be, thankful for the many great advances in cancer treatment.

However, despite our best hopes, some cancers are simply not well understood or treatable. This was my revelation. A few months after I lost my voice, I was diagnosed with anaplastic thyroid cancer. It’s a rare cancer that afflicts as few as one or two people in a million. My prognosis was grim from the start.

A surgeon and two oncologists suggested chemotherapy and radiation in the hope it may slow the cancer down. But that was merely a hope. No guarantees. I opted out, because I couldn’t make sense of being sick from the treatment in what was likely to be my last summer.

The summer is almost over now, and my cancer is closing in. I’m having more difficulty breathing and swallowing. It feels like there is a huge, growing, hunk of mucous in my throat that I can’t clear. I’d been told to expect this. The cancer is tightening its grip on my esophagus. Eventually, it will simply close and I won’t be able to swallow. Or, breathe.

I knew, going in, this would be the outcome.

Last week, the doctor told me I had, possibly, 6-10 more weeks to live. I accepted it. I’ve been expecting this. I still look and feel relatively healthy and it’s almost hard to believe this is happening. But, I’m entirely aware this is going to kill me.

I don’t have a fear of dying. I can handle that. But, the notion of choking or struggling to breathe really horrifies me. I don’t want to choke to death.

Thankfully, I have the choice of medical assistance in death. Barring some other possible event, that is how I choose to die.

Some people, in good faith, say, “don’t give up on hope.” But, hope isn’t a plan or a solution. Hope can’t guarantee I won’t struggle to breathe at the end.

I’m extremely grateful for the time I’ve had, knowing what was coming. Although I’m dying, the months between diagnosis and death have been incredibly rewarding, positive, and beautiful. I’ve never felt more connected to people, or more cared about in my life. At end of life, it’s a wonderful way to leave the world.

Deciding on treatment options for any disease should always be left in the hands of the patient. If you’re told “you have cancer,” do your research, talk to your doctors and make your own decision. It’s your life. Do what’s right for you.

Above all, use your time to reconnect with those who’ve meant much to you. Say what you want to say. End of life should be without regrets.

Enjoy your time while you have it.

Mike Sloan has shared his cancer story with the world on Twitter, the same way he shared his wry observations on life before he was diagnosed with terminal illness. Despite the prognosis, his sense of humour hasn’t flagged. Nor, has his brutal honesty about life as he faces his final days.

Leave a Reply to the real Sean Cancel reply