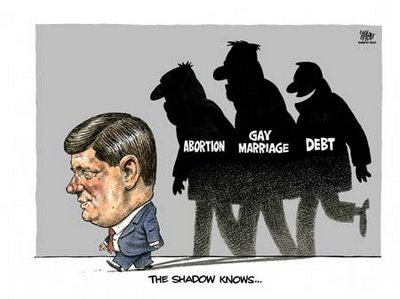 I’m about to give a speech to 200 pumped-up Alberta Liberals, so I don’t have time to opine about this issue at length. But let’s just say that Susan Delacourt’s take on Stephen Harper and the Almighty is the same as mine.

I go to church more than Stephen Harper does. If you are only an occasional church-goer, you are also a lot more diligent about your faith than the Conservative Prime Minister.

Confused? Don’t be. I’m not suggesting that Marci McDonald’s thesis – that the Canadian Christian Right is getting a lot cockier, and a lot more aggressive, in its efforts to smash down the wall between Church and State – is wrong. If anything, she’s understating things.

What I am saying is this: the abortion-related machinations of the Harper PMO – or the top guy, at least – is all about politics, not faith. It’s about throwing a bone to a well-funded, well-organized conservative lobby. That may be good strategy, but – as Susan suggests – it isn’t very honest.

It’s the most despicable kind of cynicism, in fact.