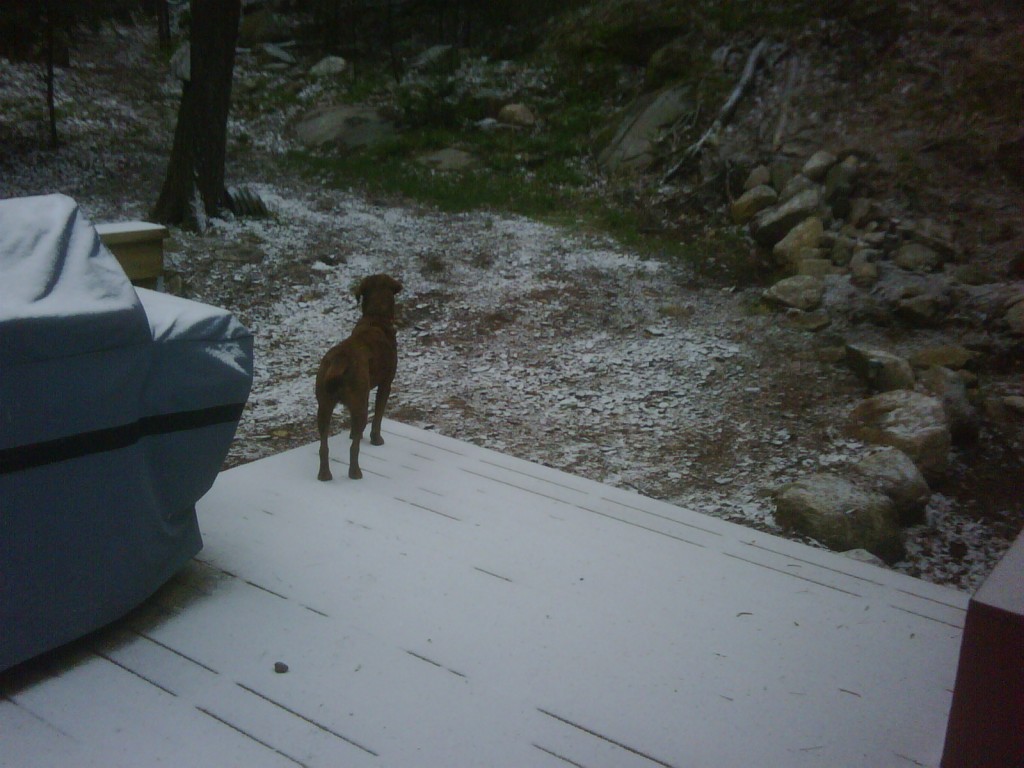 My dog, Satan, experiences the early Summer up at the cabin.

Happy day, Mom. We love you. (There was snow greeting me and the boys and the dog at the cabin this morning – that should make your day.)

• It ain’t over until it’s over, etc. The second-place position of Rob Ford in a couple of recent polls is more than an illusion – it‘s on crack. The more city voters get to know Ford and the full-on-crazy stuff he’s said over the years, the more they’ll gravitate to Rocco. Believe it.

• All roads lead to JC. If, as The Economist opines, Canada is in pretty good shape, it’s because (a) we didn’t allow the banks to do what they wanted and (b) we paid down the deficit when we had to. Who, um, did both those things? Jean Chrétien, that’s who.

• Minority-rule Britannia. We were at the British Consulate Thursday night – where I had a nice chat with John Turner, among others – and watched events unfold, or not. Friday, I spoke to labour leaders, and one of them – a Brit expat – asked about the result the night before. “Politicians, for obvious reasons, don’t like minority governments,” I said. “Voters, increasingly, do. A pox on all of your houses has become the practice, and not just the theory.”

• Big drugs, bigger profits. I’m a tad biased, but I’d say that Dalton McGuinty is kicking the proverbial stuffing out of the big pharmacy lobby’s slick, self-interested campaign of disinformation. And is that Timmy Hudak’s Regressive Convertibles I see supporting said lobby? Hmmmm. Could one of their campaign managers have a connection to the big drug stores, too? Stay tuned.