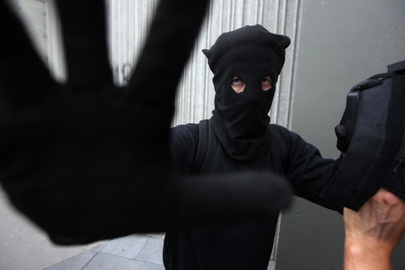 What the world saw as the face of Toronto this weekend.

They may be right. But they are sadly mistaken if they think the communications disaster that was the G20 weekend won’t be a significant political problem for them in the coming weeks and months. Mainly, that is because Canada’s mainstream media establishment are all in Toronto. And – due to extraordinary events like this one, and this one (which – because I know the family who was terrorized – has left me livid about the truly fascistic quality of it) – the media establishment is seriously pissed off.

So, as Conservative staffers and ministers and MPs sit at their desks this morning, scanning for some news coverage that will convince them that it was worth all the trouble, I say: good luck to you.  With the coming onslaught of investigative reports, lawsuits, complaints and demands for inquiry, you’ll need luck aplenty, boys and girls.  Watch this little bit of footage, if you doubt my words: this what singing ‘O Canada’ got some people this weekend.

The Toronto Star’s publisher – someone not to be trifled with, and no bleeding-heart liberal, either – says it better than I ever could.  He speaks for many of us, in fact:

G20 EDITORIAL: BRUTAL SPECTACLE FAILED A CITY AND ITS PEOPLE

The G20 security strategy has been spectacularly successful at cocooning the world’s leading politicians and staggeringly ineffective at protecting the property and peace of mind of Torontonians. And the one, inevitably, led to the other.

By bringing in thousands of heavily armed strangers and throwing up barricades everywhere to regular traffic, frightening off good and decent citizens, Canadian authorities created a ghost town in the heart of our city.

Perfect for the political leaders. Protesters were kept blocks away from where the deliberations were going on.

And most protesters conducted themselves faultlessly as the global good and great met behind rings of gulag-like fencing and battalions of police beating Plexiglas shields with batons in a primitive show of might.

It was, however, less than perfect for the city, its businesses and its inhabitants. The only force that can prevent vandalism and mayhem in a city is the presence of its population. Surely that was the lesson every urban planner learned from looking south to the hollowed-out urban war zones of the United States in the 1960s, 1970s and 1980s.

No police force, no matter how large, how well armed, how empowered to limit the civil rights of citizens, can stop vandalism in the empty shell of a city. Canadian authorities have proved that two days and nights running.

The strategy that ensured G20 leaders would never have to see a Canadian who wasn’t a politician, a police officer or a waiter lacked even a glimmer of common sense when it came to the security of Toronto and Torontonians.

They took our city to hold a meeting and bullied us out of the core, damaging the commerce of thousands of merchants and inconveniencing the entire population. Then, they failed to protect our property. Along Yonge St., as self-described anarchists were smashing stores unopposed, terrified merchants and their staffs sought shelter behind counters and in basements. If these establishments had been set alight, all of the thousands of fearsomely equipped police would have been able to do little more to save our citizens than they did to save their burning cruisers.

For the last few days, the city has looked like a vast reality TV set, where heavily garbed gladiators in black, burdened under bullet-proof vests, guns, walkie-talkies, shields and batons, try to chase down a wild, quick-footed band of anti-gladiators in black sweat suits and bandanas. And it cost us $1.2-billion to stage and choreograph this grossly unequal contest.

Canadian authorities knew that this overweening show of paramilitary hubris would draw the violent dregs of nihilism from around the world. Previous summits offered stark and certain warnings. Given that, the attempt to provide security for the city and its inhabitants has been a sad and disturbing failure.

What is the critical lesson?

The idea that this was an effective way to show off Toronto to foreign guests is bewilderingly stupid.

Canadian authorities created a city no citizen could recognize and no visitor could admire. Then, they allowed a pack of brutes to trash it.