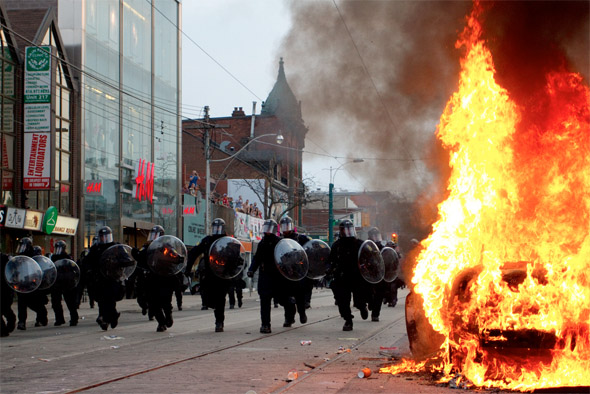 Over the years, I’ve worked in politics and as a cops reporter, so I can confidently report this: precisely no one at the G20 summit gives a rat’s ass about what is being said this morning on blogs and web sites like this one. They just don’t.

That said, I have two questions, which I offer in my capacity as a Toronto taxpayer:

1. When they knew there was always going to be trouble (which they did, which is why they spent $1 billion on security), why did the Harper government continue to insist that the centre of Canada’s largest city would be the preferred location for the summit – when it clearly could’ve, and should’ve, been held somewhere else?

2. Out of that billion dollars, couldn’t a few bucks have been set aside to hire some police officers to prevent the violence and destruction taking place elsewhere in the city – as seen, to cite just one example, in this disturbing raw footage (click “Anarchist Tear Apart Yonge Street” in CTV News Video Player) showing not one cop (not one) intervening to stop mayhem on Canada’s biggest and busiest street?

Those are my two questions. Nobody, as I say, will be the least bit interested in them. But, as Sunday morning gets going, I suspect a few other folks may be looking for answers, too.