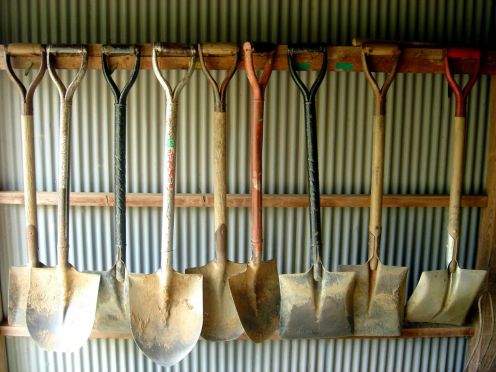 None of those mistakes, in and of themselves, are things that I can realistically picture Joe and Jane Frontporch angrily debating around the kitchen tables of the nation.  Perhaps you can picture Joe sitting up at night, bathed in sweat, and angrily remarking to a worried Jane: “Goddamn! I can’t sleep anymore, because I’m too upset about the fate of the long-form census!” But me, I just don’t see it.  I didn’t even know how to spell “prorogation” at the start of 2010.

That’s not to say that the Harper Reformatories didn’t make mistakes with the communication of their census decision, or the anthem one, or prorogation, or whatever.  They did. Even Conservatives say so.

So if I’m right, and none of those mistakes was, say, as significant of turning a structural surplus into a massive structural deficit, then why did the census decision get so many people so ticked off?

Because of small shovels, that’s why.

Voters are sophisticated enough to know that as much, or more, can be revealed about someone’s character by the little things as with the big things.  They believe that individual governments have virtually no long-term impact on the big files – the stability of economies, markets, regions, and so on.  They also believe that the policy differences between the mainstream political parties are largely negligible.  (They’re wrong about that, but that’s what they think.)

That’s why they attach importance to the smaller issues, the so-called watercooler stuff.  If your neighbour goes to work and makes super-important decisions that affects a company’s bottom line, say, you rarely ever hear about that.  But if he empties out his chlorinated pool into your rose bushes, and kills them off, you’ll be muttering about that for a long, long time over the back fences.  In the same vein, nobody remembers, particularly, what Nixon and Kennedy debated in that crucial presidential debate in 1960.  They do, however, remember how sweaty and swarthy Nixon looked.  It suggested to them that he wasn’t trustworthy.  It wasn’t fair, or even a big deal, but it was enough to affect the outcome.

The Harper regime, ipso facto, is doing what governments always end up doing: it is busily working away at defeating itself.  And, as with the census decision, it’s doing so with the smaller stuff.  To wit, Joe Frontporch: “You know, I don’t really care about the census or whatever, but these Harper guys sure are screwing up a lot, these days.  I think they need to be taught a lesson.”

Political graves are dug by small shovels.  It was ever thus.