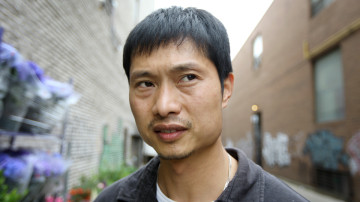 David Chen is my hero. He should be yours, too.

Last year, David – a 35-year-old Toronto restaurant employee – spotted a creep on a bike stealing a box of plants. The same character had been stealing stuff from people and businesses in the Chinatown area for a while. Everyone knew who he was and what he was doing.

David spotted the guy later that same Saturday, and he confronted him. The guy dropped his bike and took off. David chased after him with two other restaurant employees. When they got him, they tied him up by his hands and feet, put him in a delivery truck and immediately contacted police. They made a citizen’s arrest.

But when the cops arrived at the Lucky Moose Food Mart, everyone – including David and the two other guys, along with the thief – was arrested and charged. The three grocers were charged with assault and kidnapping; the man on the bike was charged with theft. David was kept in jail overnight. The crook, however, was promptly released on bail.

Lots of shopkeepers and customers in Chinatown have been pretty upset with what has happened to David, and they should be. They’ve told the media the area is plagued with petty theft, but that the police often don’t get there fast enough, or at all. The police and the Crown’s office (one of the worst in the country, in my view) have been dancing on the head of a legal pin, saying what David Chen did wasn’t really a citizen’s arrest because, um, er, it wasn’t a “continuous event,” your Honour. That’s B.S.

Section 494 of the Criminal Code allows “anyone” to make an arrest “without warrant” if they believe someone has committed a criminal offence. Sounds like what David did, doesn’t it? Check.

The section further provides that the citizen “shall forthwith deliver the person to a peace officer.” David did that, too. Check.

The whole thing seems to turn on the fact that the bad guy was not being “freshly pursued” by the good guys. What does “freshly pursued” mean? Beats me. “Fresh” is a word you can apply to any edible product, in any circumstance, without being arrested. But in David Miller’s Toronto, “fresh” has to mean “continuous,” or someone is going to charge you with kidnapping and a bunch of other stuff, too.

As you guys know, I’m not a law-and-order maniac. As a past member of the executive of various provincial and federal law associations, I actually love the genius of the law. But, in this case, I would have to admit that the law is, indeed, an ass.  And politicians from all parries – Liberal Joe Volpe, Conservative Jason Kenney, NDPer Olivia Chow – apparently agree, and have shown their strong support for David.  Everyone should.

David Chen, meanwhile, is my hero.  He’s in court again today for his trial.  Please drop by to show him support.