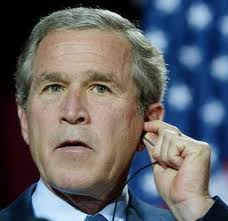 So I don’t have a cold or anything. But there I was at Emerg at East General late last night – and an urban hospital Emergency Department on a Friday night with a full moon is a real treat, let me tell you – with my fat head feeling like it was about to split open.

Didn’t get to see a doc until this morning, however. As suspected, it’s the Mother of All Ear Infections©. The doc and I got to talking about how I might have gotten it. Mentioned that I’ve done a lot of TV interview things, lately, wherein you have to jam a thingie in your ear to hear the host.

“They ever clean that off?” asked she.

“I’ve never seen them clean it, now that you mention it,” said me.

“Okay,” said the doc. “Next time you do an interview, make sure it’s clean.”

Personally, I think I somehow got a Conservative talking head’s DNA, and my body rebelled. Who’s wouldn’t?

Hear that, Powers? Bring alcohol swabs next time, would you?