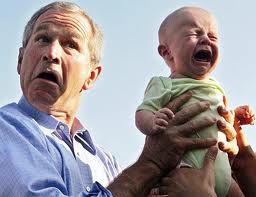 He had that effect on voting-age citizens, too.

Or, there he is on another channel, telling Matt Lauer he has no regrets about permitting terror suspects to be waterboarded – which, the dictionaries remind us, is “a form of torture” wherein drowning is simulated.

“Damn right,” Dubya tells Lauer. He then goes on to say his feelings were “hurt” when Kanye West called him a racist for failing to help the predominantly black population of the aforementioned New Orleans in the wake of Katrina. Got that?

Torture – “damn right,” it’s A-OK. Being called a racist by a musician a lot of people never listen to – that “hurts.”