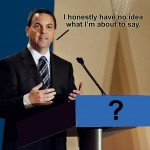 But don’t worry – Rocco Rossi has a plan to fix everything!

“A fight within Ontario Conservative party ranks flared up again this week after an e-mail revealed links between a renegade candidate and a sitting MPP.

The e-mail from Jack MacLaren, who is trying to unseat 33-year veteran MPP Norm Sterling as the Progressive Conservative candidate in Carleton-Mississppi Mills, appears to be routed through MPP Randy Hillier’s website.

Sterling has complained bitterly about links between Hillier, his caucus colleague, and MacLaren, the man trying to unseat him. He says he plans on raising the issue anew with Progressive Conservative leader Tim Hudak.

“Perhaps he will say something to Randy when he becomes aware of it,” he said.

Hudak, who embraced Hillier during the party’s 2009 leadership, even adopting the latter’s policy to abolish the Ontario Human Rights Tribunal, refused a request from the Citizen to comment on the situation. A Hudak aide also did not respond to an e-mailed request for a statement from the PC party leader.”

(By the by, that italicized bit sure is interesting. Kind of public funding for private religious schools all over again. Except worse.)