The win last night was the best thing that has happened to the country since – well, since Vancouver hosted the Olympics (there’s a trend developing here…).  In honour of the Canucks’ wonderful victory, I am asking you to settle a debate that my kids and I have all the time – namely, which Canucks logo is best? 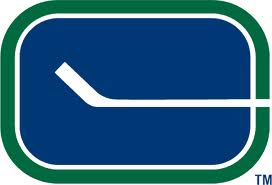 This one, designed by North Vancouver artist Joe Borovich, which was the Canuck logo from 1970 to 1980?

Or the current one, which debuted in 1997 and which showed a Haida-style orca in full flight (and may have been associated with the team’s parent company, Orca Bay).

I won’t indicate which one I prefer.  And I refuse to include the horrible “flying V” logo used from 1985 to 1997. It was an abomination.

Vote, proud residents of Canuckistan! Which Canucks logo to you like best?  I guarantee the team is waiting to hear from us!