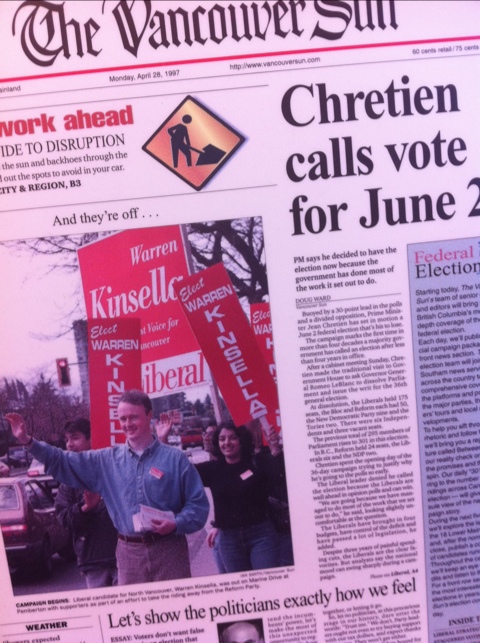 The NDP’s Karl Belanger, of all people, just indirectly reminded me that, fourteen years ago today, I got beaten (soundly) in North Vancouver. The above pic is the cover of the Vancouver Sun on the day after the campaign kicked off.

Sometimes I think about that race, which was a privilege to be a part of. I lost, in part, because some said I was a parachute candidate (I wasn’t – I competed for the Liberal nomination), and because the local rag (which published Holocaust denier Doug Collins) detested me. Also a factor: the worry that I’d be a trained seal, and that I wouldn’t ever dissent with my party.

For those of you who know me, that last one is kind of amusing. Me being reluctant to oppose the party’s leadership? That’s funny.

Anyway. Hard to believe it’s been so many years. Congrats to all MPs, from all parties, who are celebrating the anniversary of their victory today. I would’ve like to be there celebrating with you, but that’s politics (and life).