Starting an election campaign lying to reporters isn’t a smart thing to do.  But that’s what the PCs and the Dippers are doing this morning, with this story.

What the opposition operatives neglected to tell the Toronto Star, of course, is that they’ve been denying the public access to their events for quite some time now.  What they declined to say to the reporter is that paranoia, secrecy and Soviet-style tactics have been their favoured approach for weeks.

Read the story, then look at the notice below.  It was a notice the PCs were handing out to people at their August 30 event at the “K.W. Gaming Centre,” where they were present as the guests of special interests who want to put slots in bingo halls across the province.  Anyone who came close to that event, or any event since, was threatened by private police and civil lawsuits.

Like I say, don’t lie to reporters.  Sooner or later, you’re going to get caught. 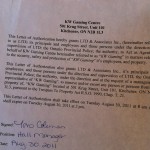