Not all conservatives are stupid

…just most of them. To wit:

“Lead researcher Gordon Hodson told LiveScience that the results of the study indicate a vicious cycle, in which people with low intelligence are drawn to socially conservative ideologies. In turn, those ideologies can contribute to prejudices.

“Socially conservative ideologies tend to offer structure and order,” he said, explaining why those with lower intelligence may gravitate toward the right. “Unfortunately, many of these features can contribute to prejudice.”

The researchers found that people with lower intelligence also tended to have less contact with other races and groups, which, Dr. Hodson said, supports previous research that determined interacting with other groups is mentally challenging and cognitively draining.“*

My book Fight the Right – which is coming out in the Fall from Random House – is chockful of useful (and irrefutable) information-bits like this.

If I do it, er, right, I will be making tiny conservative heads go pop all over North America! 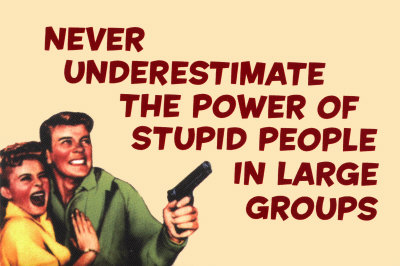