Way, way back in July 2001, I wrote this single paragraph for a column in some Canwest papers. I was poking fun at (yet another) screed Paul Wells had typed up about Yours Truly, in which Jazz Boy suggested (yet again) that I had never done anything good, ever, anywhere, and that he knows for a fact – a fact! – that I have never been part of a winning campaign. Not even as janitor.

Here’s what I wrote:

“Anyone reading this, naturally, will wonder why this Liberal ‘strategist’ is being so nice to [Stockwell Day], a political opponent. I am, after all, the Liberal ‘strategist’ who ran the entire federal Liberal election campaign all by himself, every damn thing, with no help from anyone at all (that, at least, is the recent analysis of one of the macrocephalic, girl-crazy columnists at the Post).”

I didn’t even use the words “Paul Wells”! But when he saw that good-natured bit of ribbing, well, Wells went apeshit. He didn’t say anything to me, natch, because he’s a gutless wonder. But he lodged complaints all over the place at Canwest, demanding that I be fired or disciplined or worse.

This, naturally, only encouraged me. So I posted on my then-youthful web site a cartoon of Wells with horns sticking out of his impressively-sized head. I did it myself, and I was rather proud of it. Anyway, that effrontery and insolence resulted in him going totally bananas again. So, while I was on vacation with my family, Wells demanded that my editor call me, and order me to take down the cartoon. “Seriously?” I asked my editor. “Seriously,” my editor said.

“What a fucking crybaby,” I said. “No comment,” my editor said.

Anyway, Paul – who thinks me to be insufficiently awed by his intellect and talent (true), and not nearly as deferential as I should be when in the presence of the national herald of dentist office waiting rooms (ditto) – has lately re-taken to raging about Canada’s Best-Loved Political Web Site™ and its fun-loving owner (ie., moi). This resulted in me describing Paul to a regular correspondent as, quote, “a pompous, pretentious, North-of-the-Queensway zero who has never done anything of significance, who wouldn’t know how to communicate with a real person if his life depended on it (which is why he’s never asked to go on TV, by the way, and which he perpetually whines about). Oh, he tweets every moment of his boring life, in the way that pre-adolescents do. Except that he’s supposedly a grown up. And he name-drops jazz.”

But I mean all that in the nicest possible way.

Anyway, you get the point. He’s an idiot. Moreover, I think Paulie is a bitter, petulant little man who probably got knocked around at recess once or twice, and he’s been using his typewriter to get back at the world ever since. So, to show the extent of my respect for the Girl-crazy Macrocephalic©, and to christen our renewed affection for each other, I have commissioned a beautiful new portrait of Paulie Jazz. I’d encourage him to go complain about it to Kory Teneycke, but I have on good authority that Kory thinks it’s pretty funny.

So will a lot of people. 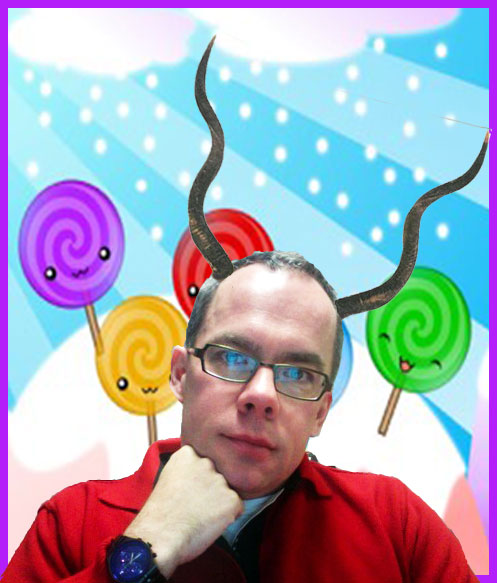