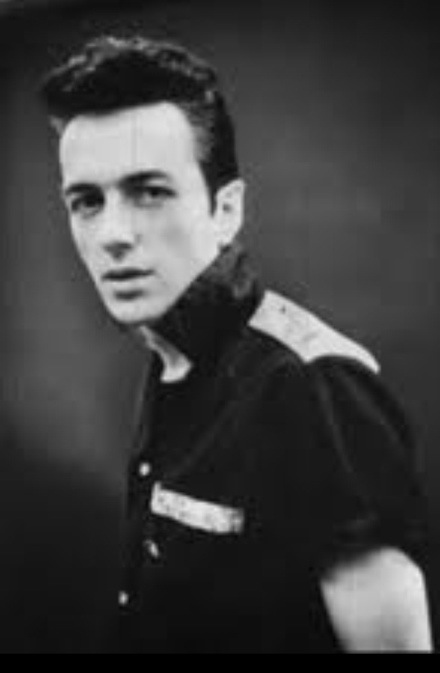 Ten years! My God, has it been that long?

Last week, we headlined Strummerfest, a musical festival in K-W put together to remember him. And, before we got going, I read part of the piece below. It ran on the front page of the Star a day or so after his passing – something I was later told doesn’t happen very often with freelancers like me.

Anyway, I miss him a lot, still. He changed my life. God bless you, Strummer.

The sticker affixed to the London Calling album shrink-wrap, 23 years ago this month, boldly declared that the Clash were “the only band that matters.” If that is true – if it was more than record company hyperbole – then Joe Strummer’s death on Sunday, of a heart attack at age 50, was a very big deal indeed.

It wasn’t as big as John Lennon’s murder, of course, which came one year after London Calling was released, and shook an entire generation. Nor as newsworthy, likely, as the suicide of Nirvana’s Kurt Cobain in 1994. No, the impact of the sudden death of Joe Strummer – the front man for the Clash, the spokesman for what the Voidoid’s Richard Hell called, at the time, “the blank generation” – will be seen in more subtle ways.

For starters, you won’t see any maudlin Joe Strummer retrospectives on CNN, or hordes of hysterical fans wailing in a park somewhere, clutching candles whilst someone plays ‘White Riot’ on acoustic guitar. Nor will there be a rush by his estate to cash in with grubby compilation and tribute discs. Punk rock, you see, wasn’t merely apart from all that – it was against of all that.

Punk rock was a specific rejection of everything rock’n’roll had become in the 1970s – namely, a business: an arena-sized, coke-addicted, utterly-disconnected-from-reality corporate game played by millionaires at Studio 54. Punk rock, and Joe Strummer, changed all of that. They were loud, loutish, pissed off. They were of the streets, and for the streets. They wanted rock’n’roll to matter again.

I met Joe Strummer for the first time on the night of October 16, 1979, in East Vancouver. Two of my Calgary punk rock buddies, plus my girlfriend and I, were loitering on the main floor at the Pacific National Exhibition (PNE). We were exhilarated and exhausted. We had pooled our meager resources to buy four train tickets to Vancouver, to see Joe Strummer and the Clash in concert. Their performance had been extraordinary (and even featured a mini-riot, midway through). But after the show, we had no money left, and nowhere to stay.

The four of us were discussing this state of affairs when a little boy appeared out of nowhere. It was near midnight, and the Clash, DOA and Ray Campi’s Rockabilly Rebels had long since finished their respective performances. Roadies were up on stage, packing up the Clash’s gear. The little boy looked to be about seven or eight. He was picking up flashcubes left behind by the departed fans.

Topper Headon was admittedly not much to look at: he was stooped, slight and pale, with spiky hair and a quiet manner. But he was The Drummer For The Clash, and had supplied beats for them going back almost to their raw eponymous first album, the one that had changed our lives forever. We were in awe.

Topper asked us where we were from and what we thought of the show. When he heard that we had no place to stay, he said: “Well, you’d better come backstage with me, then.”

Sprawled out in a spartan PNE locker room, Strummer was chatting with lead guitarist Mick Jones and bassist Paul Simonon, along with some Rastafarians and a few of the Rockabilly Rebels. They were all stoned, and grousing about an unnamed promoter of the Vancouver show, who had refused to let them play until he was paid his costs. The Clash, like us, had no money. That made us love them even more.

Joe Strummer, with his squared jaw and Elvis-style hairdo, didn’t seem to care about the band’s money woes. While Mick Jones flirted with my girlfriend, Strummer started questioning me about my Clash T-shirt. It was homemade, and Strummer was seemingly impressed by it. I could barely speak. There I was, speaking with one of the most important rock’n’rollers ever to walk the Earth – and he was acting just like a regular guy. Like he wasn’t anything special.

But he was, he was. From their first incendiary album in 1977 (wherein they raged against racism, and youth unemployment, and hippies), to their final waxing as the real Clash in 1982 (the cartoonish Combat Rock, which signaled the end was near, and appropriately so), Strummer was the actual personification of everything that was the Clash. They were avowedly political and idealistic; they were unrelentingly angry and loud; most of all, they were smarter and more hopeful than the other punk groups, the cynical, nihilistic ones like the Sex Pistols. They believed that the future was worth fighting for.

The Clash were the ones who actually read books – and encouraged their fans to read them, too. They wrote songs that emphasized that politics were important (and, in my own case, taught me that fighting intolerance, and maintaining a capacity for outrage, was always worthwhile). They were the first punk band to attempt to unify disparate cultures – for example, introducing choppy reggae and Blue Beat rhythms to their music.

They weren’t perfect, naturally. Their dalliances with rebel movements like the Sandinistas, circa 1980, smacked of showy dilettante politics. But they weren’t afraid to take risks, and make mistakes.

Born John Graham Mellor in 1952 in Turkey to the son of a diplomat, Strummer started off as a busker in London, and then formed the 101ers, a pub rock outfit, in 1974. Two years later, he saw the Pistols play one of their first gigs. Strummer, Jones and Simonon immediately formed the Clash, and set about rewriting the rules.

While political, they also knew how to put together good old rock’n’roll. Strummer and Jones effectively became the punk world’s Lennon and McCartney, churning out big hits in Britain, and attracting a lot of favourable critical acclaim in North America. Some of their singles, ‘White Man in Hammersmith Palais’ and ‘Complete Control,’ are among the best rock’n’roll 45s – ever. Their double London Calling LP is regularly cited as one of history’s best rock albums.

After the Clash broke up, Strummer played with the Pogues, wrote soundtrack music and formed a new group, the world beat-sounding Mescaleros. He married, and became a father. But he never again achieved the adulation that greeted the Clash wherever they went.

Strummer didn’t seem to care. When I saw him for the last time – at a show in one of HMV’s stores on Yonge Street in July 2001, which (typically) he agreed to give at no cost – Strummer and his Mescaleros stomped around on the tiny stage, having the time of their lives. They didn’t play any Clash songs, but that was okay by us. Joe Strummer’s joy was infectious, that night.

As the gig ended, Strummer squatted at the edge of the stage – sweaty, resplendent, grinning – to speak with the fans gathered there. They looked about as old as I was, when I first met him back in October 1979. As corny as it sounds, it was a magical moment, for me: I just watched him for a while, the voice of my generation, speaking to the next one.

I hope they heard what he had to say.