I knew that little headline would get your attention!

Tim Hudak (along with me, Gerald Butts, Alex Panetta and, er, that’s it) is not cheering for the Toronto Maple Leafs.  He has always cheered for the Bruins, and continues to do so.  Good for him.  That takes balls.

Now, when I was a kid attending Our Lady of Lourdes in Kingston, I adored the Bruins, too.  Lots of us did in Kingston.  Cashman, Orr, Sanderson: those were our hockey heroes.  Not the Maple Leafs.

Relocated to Calgary, I loved the Flames and the Habs (which were, at one level, the same organization).  Once in Toronto, I did not waver.  Why? The Leafs fans made it easy for me.

Not, I note, the Leafs themselves.  They, like all hockey teams, are comprised of young men getting paid too much to play a kids’ game.  It’s not their fault, per se.  No, I did not hate them.  I hated the Leafs fans.

Leafs fans are the most uncritical fans in the sports universe.  You could dump a metric tonne of manure at centre ice, throw a Leafs jersey on it, and the assembled fans would cheer for it.  In their multi-thousand-dollar corporate boxes, drinking shitty $20 beers.  And then they’d go buy overpriced manure merch, and wear it on weekends to trips to the Hockey Hall of Fame.

Leafs fans, who haven’t had a team that has won a cup since 1967, endlessly complain about how bad their team is.  They kvetch and moan about it.  BUT THEY STILL KEEP PAYING THOUSANDS TO SEE THE LEAFS PLAY.

And that is why the Leafs suck: even when they suck, Leafs fans keep buying tickets.  You don’t see that sort of mass delusional psychosis happening in Montreal or Calgary or Vancouver.  They’d stop coming.  And at that point, team owners would be obliged to – surprise, surprise – put together teams who can win.

And that’s why I detest the Leafs – their fans.  Their fans are the problem.

Oh, and Tim Hudak?  Your resolve won’t hurt you with Toronto Leafs fans.

Deep down in their tiny black hearts, they suspect you are right. 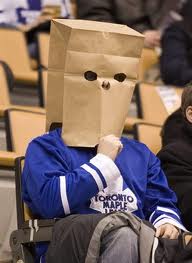