The place where the Rob Ford crack cocaine video was shot, and people were shot 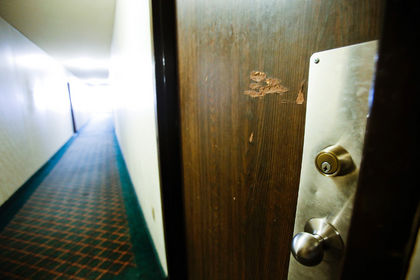 The seventeenth floor at 320 Dixon Road, in Kingsview Village.  Bullet marks can be seen on a door on that floor, above.

The Sun has more:

“Several days after the shooting, the Toronto Sun learned the holder of the video that allegedly shows Rob Ford smoking crack also lives on the 17th floor of 320 Dixon Rd.

Toronto Police won’t talk about the video or the shooting, so it’s unclear if the two are connected.

Police have confirmed that homicide detectives are investigating after learning of the whereabouts of the video from a senior staff member in the mayor’s office — now believed to be Ford’s former chief of staff Mark Towhey, who was fired last week…

Whether or not investigators have the video — which Ford has claimed “does not exist” — remains a mystery.

Interestingly, the man who is believed to have shot the 90 seconds of footage with his cellphone, and may have been killed for it, also lived in Kingsview Village.

Anthony Smith, 21, was shot to death outside a King St. W. nightclub March 28 and his 19-year-old pal, who can’t be named because of a publication ban, was wounded.

Both men are also in a much publicized photo where they and a third man appear to be socializing with the mayor.”