No digital device was harmed in the making of this post 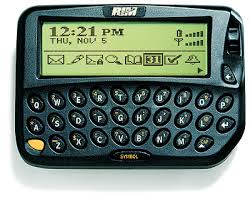 For years, I have had two devices – a Blackberry and an iPhone.

I was always a Blackberry guy, right from their first pager-style model (that beauty up above). I loved it because I could write on it. I write about 1,000 words every day, so it was just what the doctor ordered.

I got the iPhone because I stepped on my old Motorola at an SFH gig. I wanted something that was a good phone, and that had iTunes. So I got the iPhone, very reluctantly (Apple people always seemed like religious fanatics to me). But the camera and camcorder impressed me, so I kept it.

I kept the Blackberry too, however. It had a keyboard, the iPhone didn’t. Typing on an iPhone is a joke.

For the past year, I’ve had the Blackberry Q10 or Z10 or whatever it is. I hated it. It was awful. It’s biggest problem, I think, was that it was a Blackberry that was trying to be an iPhone.

Yesterday, I got rid of it. Traded it in for an old Blackberry 9900, on which I’m writing this post.

My iPhone? It’s a 5, but I refuse to get the 5S or 5C or whatever. They, like the Blackberry 10 series, offer nothing that I (and perhaps you) really need.

They keep changing these devices to pick our pockets. Not for any other reason, I think.

Am I right? Am I wrong? Comment away. And tell us what device you’re using to do so!