In Friday’s Sun: why I’m not running in Toronto Danforth 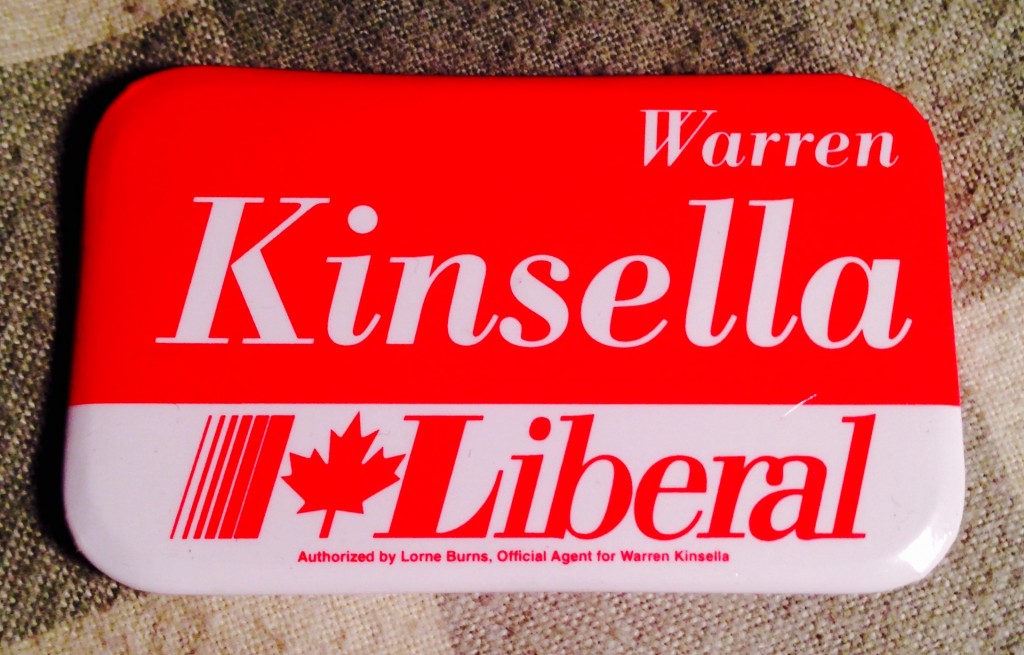 I am, I am. I’ve occasionally been mad at the party, over the years, and I haven’t been wild about some of the people running it, either. But when all is said and done, I’m a Liberal.

I was rummaging through a drawer recently, and found proof: a “Warren Kinsella Liberal” button from when I was the federal Grit candidate in North Vancouver in 1997. I lost that one, decisively, but it was an honour to run. I loved it.

A few weeks ago, the irrepressible, indefatigable Dennis Mills approached me to suggest I seek the Liberal nomination in Toronto Danforth, the riding he held for many years. I’ve lived on the border of the riding for almost as many years.

I didn’t think it was a good idea. I’m too independent, I told my Grit friends Dennis Mills and Catherine Davey. I’m a writer, and – while a Liberal and a liberal – I haven’t ever hesitated to criticize my party when it deserved it. I’m a contrarian, I told him. I’m incapable of being deferential to authority – ie., I’ve never been good at kissing powerful behinds.

But Dennis kept talking to me about it. I started to think about it.

I heard from people. Two former Prime Ministers told me I should do it. Two Ontario Premiers – one sitting, one former – encouraged me to give it a shot. Lots of former cabinet ministers and MPs and Grits were similarly enthusiastic.

But the folks around Justin Trudeau weren’t enthusiastic. They were against it, in fact.

A senior Trudeau advisor told me why. My writings over the years, here and elsewhere, had been too critical of Team Trudeau. They didn’t like that.

That wasn’t all. Trudeau’s circle is now dominated by folks who tried to drive out my friend Jean Chretien a decade ago. They, too, were unenthusiastic.

Thereafter, I started to hear from many Grits that the party’s mysterious “Green Light” process – wherein the suitability of potential candidates is assessed – would be used to deny me an opportunity to run. Some pretext would be found.

All that said, let me also say this:

I agree with Trudeau’s gang. I shouldn’t run under their banner – but not for the reasons they cite.

I am, indeed, a contrarian. When you are a writer, that’s your job: to tilt at windmills. To try and tell the truth to power.

If Team Trudeau wants people who are in lockstep with them on every issue, every single day, I’m not the guy they want.

There are other reasons why I won’t run. Like Bob Rae, Lloyd Axworthy, Romeo Dallaire and several million voters, I disagree with Trudeau on the international effort against ISIS. When genocide is happening, indolence is complicity.

Ironically, I agree with Trudeau’s position on abortion: I think it should be safe, legal and rare. But I don’t like how Trudeau arrived at his position: political parties shouldn’t dictate intensely personal matters of conscience to Members of Parliament.

I also agree with him on the need to have more women in Parliament. And if I have to stand down to ensure women have an equal voice in Parliament, I will do so.

There are other reasons, of course. I’ve got kids who are still young. I’ve got a business to run. I’ve got a book coming out. I’m getting hitched to the most amazing woman. And so on.

Mostly, however, it’s not a good fit. The Trudeau guys aren’t enthusiastic about dissenters. And I’m a dissenter.

Will I give it a shot in the future? Maybe.

And do I still hope Trudeau wins? I do, I do. It’s time for a change. I like his energy and his positive attitude. Canada needs that, in Toronto Danforth and elsewhere.

In the meantime, however, Sun readers are stuck with me.