I’ve written books about the notion that, when it comes to speech, reasonable limits should indeed exist. Calling for genocide against a group of people, for example. Holocaust denial in the classroom. Child pornography. Here’s what I wrote about the issue of cartoons and religion almost exactly eight years ago to the day on this web site:

I believe that we are entitled, as a society, to sanction (civilly or criminally) those who use words and images to deliberately or recklessly inflict harm on others – as with laws relating to the propagation of hate, or laws prohibiting child pornography, or defamation codes, or laws designed to sanction pornography that promotes violence against women and children.

And, yes: I believe we are entitled as society to place reasonable limits on the expression of actual hatred towards religious faiths. I believe that words and images that expose the tenets of a person’s faith to hatred should be condemned and, where appropriate, punished. Expressing hatred about someone else’s spiritual beliefs is not free speech. It is hatred, and it is almost always calculated to cause pain and hurt.

Which brings us, two years later, to the global debate that raged about cartoons depicting the prophet Mohamed as a terrorist – and Ezra Levant’s decision to publish them, repeatedly. The cartoons set off a wave of emotional protests and threats on a global scale – and fostered a vigorous debate about what constitutes free speech. That debate has been reignited by Ezra’s appearance before the Alberta human rights body a few days ago. (And I sense he is genuine about his libertarian view, by the way.)

After [the 2000 federal election campaign, in which I did this], conservative writer Claire Hoy had written something about me, so I invited him to lunch. He showed up, and we had a great lunch and a great debate about censorship. Hoy told me he objected to hate laws.

So I asked Claire this: “Don’t you think there is a difference between a young guy painting a happy face on his school wall – and a skinhead who paints a swastika, and the words ‘DEATH TO THE JEWS’ on the front of a synagogue? Isn’t there a qualitative difference between one action, and the other? Hate laws are designed to address that difference, aren’t they?”

There is indeed a difference between an act of mischief, and an expression of hatred. And that’s my point, here. Certain words and images can cause actual fear and pain and hate.

In early 2006, at a band practice, we were talking about another Toronto punk group, called – and I’m not making this up – Tit Fuck Me Jesus.

I’m a church-going Catholic, and that band’s name doesn’t offend me in the slightest. Nor the stuff found on the covers of Black Flag records, nor the songs by my beloved Bad Religion.

But that’s just me. And I can certainly see how someone else could be offended – really and truly hurt – by something like a band called Tit Fuck Me Jesus. And, just because I’m okay with that, doesn’t mean that someone else has to be.

That’s pretty much where I end up on the cartoons that depict Islam’s prophet as a murderer. You might not find such things hateful or even hurtful, but many others do. Deeply, truly, honestly.

And, when all is said and done, what Muslims seek from the rest of us is not anything we do not already seek from them. Which is, mainly, a modicum of respect for the things they hold closest to their hearts.

I say they deserve that respect.”

Sorry for the length of that excerpt, but I wanted to make a point, which is: I don’t think you can’t readily label me a knee-jerk anything-goes libertarian.  Nope.

But this morning, I just about drove my truck off the road as I listened to CBC Radio’s Metro Morning. On it, the publisher of the Toronto Star, John Cruickshank, talked about how it was “wrong” – he used that word repeatedly – to publish even a link to the cartoons for which the staff at Charlie Hebdo actually died. I couldn’t take notes because I was driving, but Cruickshank – whilst whinging and sermonizing, without irony, about “free speech” – also said the Star wouldn’t publish the Charlie Hebdo cartoons because they lack “context.”

I could go on ad nauseum about the nausea that induced in me, here, but let me be brief, because I have to get to work: Cruickshank sounds like a nice guy, but he’s full of shit.  Here’s why.

That distinction is apparently lost on Cruickshank and some other journalists this morning. If you look at what Charlie Hebdo was doing, you would see they weren’t in any way agitating for genocide, or knowingly propagating hatred.

Over the years, they were publishing cartoons that poked fun at several religions and religious figures. During the time that they did so, Islam became the world’s fastest-growing religion, at a rate of 2.2 per cent every year. While Charlie Hebdo was publishing satirical cartoons, to put a fine point on it, the sky – filled, as it is, with deities – did not fall.

Decide for yourself. I’m no free speech lunatic, and I did just that. Below, here are the Charlie Hebdo cartoons the Toronto Star – which invokes “free speech” for every single idiotic thing that they do, day in and day out – refuses to publish. My hunch is that some of you will look at them, some of you will laugh, some of you won’t, and all of you will go about your day (as I am about to), undeterred.

And if, well, one or two want to kill me for publishing them, send me a note, and we’ll arrange for a time and place to get together, to save us both some time. 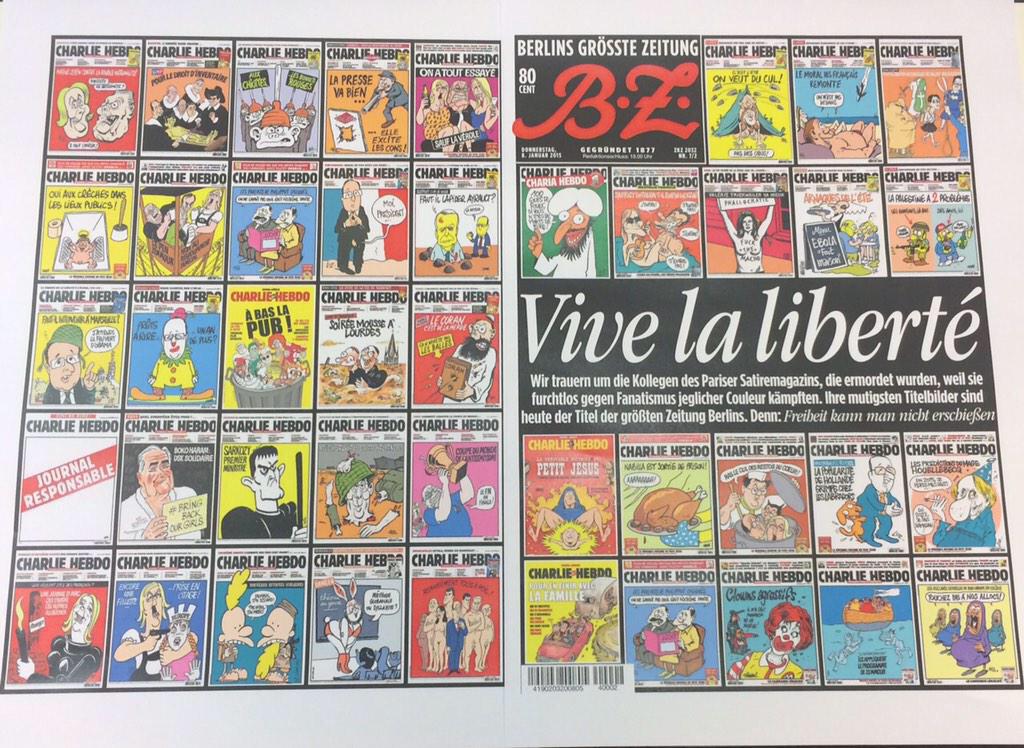