Both reactions somewhat emotional, as I say. One is to state that (I think) I was wrong.

In the Summer, I wrote this:

“On the much-read National Newswatch Thursday morning, then, a column on Harper and foreign policy was the top headlined item. In it, the Public Policy Forum’s Dr. Don Lenihan wrote that Harper’s approach to foreign policy “just might pay off at the ballot box.”

Writes Lenihan, who is influential in Ottawa: “Harper has positioned himself as a champion of democracy and is using his place on the world stage to stand up to tyrants and terrorists.”

Politically, “[Harper’s foreign policy moves are] starting to look like a very smart. By contrast with Vladimir Putin or Hamas, Harper can’t help but look good. Standing up to them looks even better. While he’s been criticized for being too one-sided, and even of shooting from the lip, lots of people agree with his hard line.”

Indeed they do. This assistant to a former Liberal prime minister is one of them. Harper’s willingness to be tough with the likes of Putin and Hamas – in effect, punching above Canada’s foreign policy weight class – is something to be admired, whether you agree with him or not.

But will it pay electoral dividends? Can Harper actually win an election against the surging Trudeau Liberals with foreign policy?

The events of recent months – the assassinations of members of our Armed Forces, most notably – have me reassessing my position. In dangerous times like these, people make important choices. In Canada, the choice is presently between, on the one hand, two Opposition leaders who seemingly oppose confronting and defeating terror in every possible circumstance – and, on the other hand, a Prime Minister who apparently believes handing out box lunches to the victims of ISIS is insufficient.

That’s my first response to the atrocity in Paris: we live in dangerous times, people know it, and they will vote accordingly.

My second response to what happened – and which I encourage everyone else to do, too – is to post here the cartoon of ISIS leader al-Baghdadi that Charlie Hebdo tweeted just prior to the murders of their staff. I guess my message is this: burn in Hell, you monsters. You can’t kill all of us. 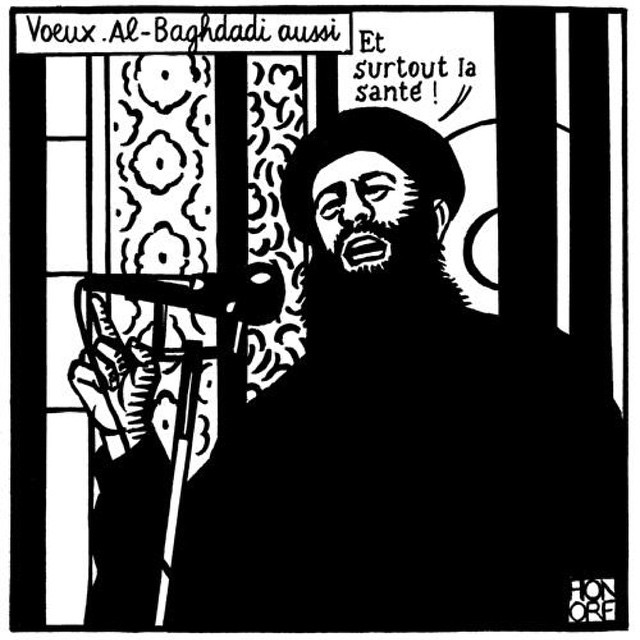