Who is going to win the 2015 federal election?

Here’s what the bright Mr. Grenier says on CBC’s web site this morning. But what do you guys think?

Last week, Lala and me had a long-overdue dinner with two of the smartest political folks I know. We decided to wager on the outcome of the 2015 election, region by region.

I’ve blurred out the names of the participants in our little election poll, to protect the guilty. On the left side of the Moleskin notebook page, however, is a column representing the Atlantic region, Quebec, Ontario, the Prairies and B.C. (Moleskin didn’t leave enough room for the Territories, sorry. And some of my addition may be wrong, but tant pis.)

On the right side, you’ll see that I have prognosticated that the Liberals will do well: they’ll dominate in the Atlantic and Quebec, do better in Ontario than they did in 2011, pick up a few in Manitoba-Saskatchewan-Alberta, and then get a third of the British Columbia pie. But I don’t see the NDP disappearing completely, which is why the Tories will remain in the Grits’ rear view mirror. It’ll be close, I predict, and we’ll be back at it in 2017, after a Conservative leadership race. Yay! More opportunity for baseless speculation!

Now, Grenier and various pollsters say the Conservatives are edging ever-closer to a majority. Trudeau has lost ground, they say, due to his stance on the international effort against ISIS, and because of uncertainty about his ability to manage an economy that seems fragile. The verbal missteps certainly haven’t helped, either.

But that’s them. You’re smarter, Dear Reader. What do you think? Place your bets, in comments, and have fun. 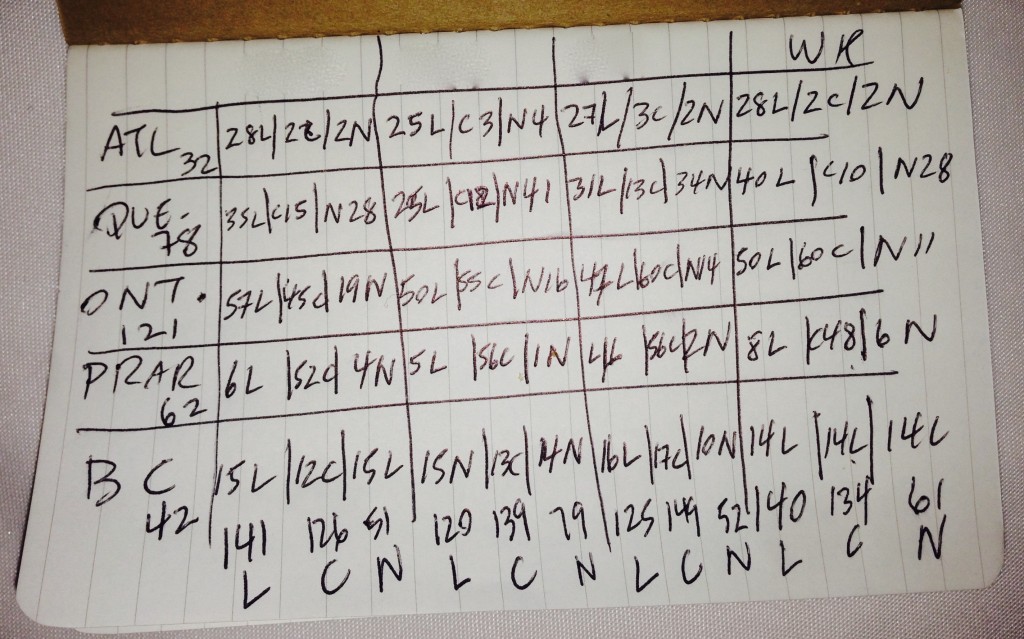