Apparently the Conservatives and the Liberals are both courting Chief Kettler. I think that’s nuts.

And that’s just what I could find in a quick five-minute Google search.  There’s plenty more.

Bill Blair oversaw the biggest curtailment of civil liberties in this country’s recent history.  He needs to be called to account for that – not rewarded for it with seat in Parliament.

If he becomes a candidate, I personally plan to ensure that every bit of his history is better-known – and particularly his appalling record during the G20. Who’s with me? 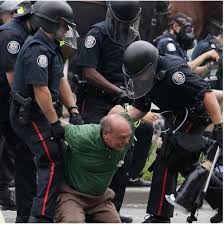 John Pruyn had his prosthetic leg ripped off by Blair’s men.