Changing the channel: words of wisdom from The Rainmaker

(Who I miss very, very much, by the way. I adored that man.)

Which brings us to this photo of someone’s jacket, captured this morning in Saskatchewan and sent to me: 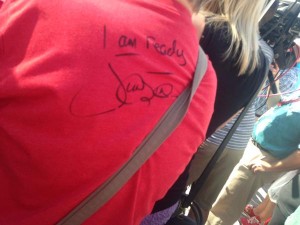 We see the same problem in this Liberal ad: they’re repeating the negative the Tories are disseminating about them.

Start changing the channel, instead.