The NDP candidate in Oshawa, Mary Fowler, apparently thinks so.  She promoted the crap below on Twitter.

She did that a few weeks ago, so we checked again just before I posted this, to see if she had changed her mind.  She hadn’t.  So: her ongoing and enthusiastic approval of this sort of thing – to be clear, a picture equating Hitler with Harper – is a bloody disgrace.

And, an interesting side note: it was Liberals who sent this to me, not Tories.  They may disagree with Harper, but they think the NDP candidate in Oshawa needs to be making a full retraction and an apology, immediately.  And they’re right.

You can contact Mary Fowler here. Let her know what you think. 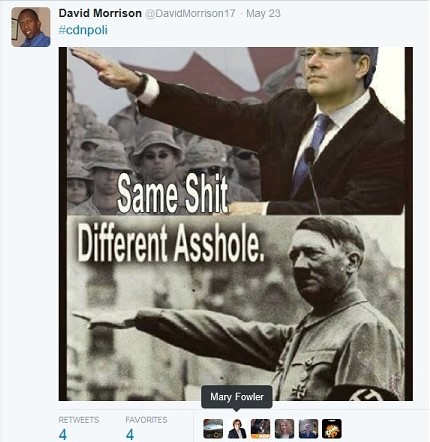