A message from daughter to each one of you

We are not a country.

That is the only conclusion that can be reasonably reached, when what is happening in Attawapiskat is happening again. Suicides, and suicide attempts, in numbers that leave you without words.  Or should.

When the Attawapiskat stories started to break over the weekend – with their bleak, black, grinding sameness – I came to the conclusion that there are now only two things that will truly change all this. One, the police start investigating it, and some people – the ones responsible, as well as the ones who have been irresponsible – get thrown in jail. Or legislatures get shut down, literally, until a cabinet minister or two is forced to resign.

I have written about this subject before, more than once. And, yes, I am biased, because I am so proud to be a father to a citizen of the Carcross-Tagish First Nation. But I am so fucking fed up with these serial horrors, and nothing ever changing.

My daughter, meanwhile (and typically) is much more gentle than me. I encourage you to read what she says, and the Boyden too.

And then I encourage you to push, once and all, for real and meaningful change.  Because, until we do, we will never be a real country.

We will only be complicit. 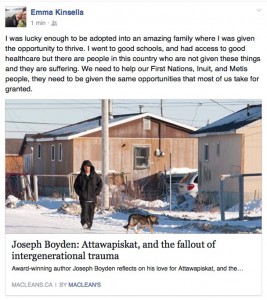