Who will be the next President of the United States of America?

Increasingly, it is getting less clear.

The proud residents of Wisconsin probably always thought they were important enough to affect the future of the planet. But, with the greatest of respect, the rest of us didn’t. Last night, however, Wisconsin altered things, quite a bit.

To wit, from my much-beloved NYT: 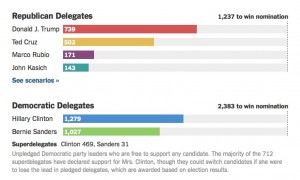 So what do you think, O Reader?