About that Tory convention, and marriage

It looked like they had a good one – a great one, even.  Even CBC says so.

I have a column about them, and their convention, in today’s Hill Times.  I will have it up on The War Room tomorrow.

In the meantime, allow me to dissent from the joyful chorus about this – the overwhelming vote of CPC delegates to accept equal marriage.

They had to pass a vote about that, you see, because their official policy book actually defined marriage as the union of a man and a woman.  To be precise, the party said marriage was, quote: “union between one man and one woman.”

That’s what it said, as recently as 2016 A.D.  Since 2004 A.D., however, marriage has actually been defined differently.  No less than our highest court said so, right here.  After a bunch of provincial Courts of Appeal radically embraced the proposition that that everyone is equal, the feds made a reference to the Supreme Court.  Among other things, the Supremes said:

The mere recognition of the equality rights of one group cannot, in itself, constitute a violation of the rights of another. The promotion of Charter rights and values enriches our society as a whole and the furtherance of those rights cannot undermine the very principles the Charter was meant to foster.

See? Equal means equal.  No one gets hurt.  Gay people are entitled to have free and frequent access to messy divorce actions and custody squabbles, and unrelenting misery, just like the rest of us.

The Conservative Party of Canada – who were the government for most of the years that followed 2004 – refused to go along with that, however.  They continued to say marriage was the union of one guy and one gal. That’s it.  They stubbornly, wilfully refused to accept the change that had been, er, mandated (pun intended) by several Courts of Appeal and one Supreme Court.

They refused to accept the law of the land.

Anyway, this past weekend, they finally did.  Great. I’m happy about that, I guess, but I would have been a lot happier if they had done so, say, a decade ago.  When it was, you know, constitutionalized.

You will forgive me, therefore, for declining to heap praise on the Conservative Party’s weekend decision to go along with the law and the Constitution.  I don’t think anyone should ever get awards for obeying good laws or respecting the Constitution.

Especially, you know, the people who are supposedly lawmakers. 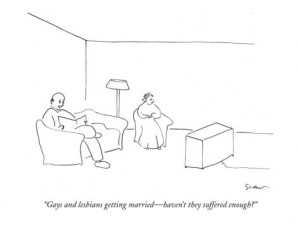