Don’t piss off a Newfoundlander, plus Premiers and popularity (updated)

…that’s the message I take from this little ARG snapshot about Premiers and their popularity. I mean, Newfoundland’s Dwight Bell was elected Premier right around the same time Justin Trudeau became Prime Minister – and the latter still enjoys record levels of support, while the former is the least popular senior politician in the country!  Weird.

Brad Wall, as always, is a political phenomenon.  Brian Pallister is the new guy, and enjoying a honeymoon.  (Cocky progressives, nota bene: the two most popular premiers are conservatives.) Nova Scotia’s Stephen McNeil remains a solid performer and a good prospect for re-election next year.  Quebec’s Couillard has clearly benefitted from his principal opponent turning into a three-ring circus.  Notley has – and I hear this from all my friends, Conservatives included – done a simply outstanding job following Fort Mac, and is much more competitive than just a few weeks ago (her main opponents, meanwhile, continue to split their vote).  BC’s Christy Clark would probably like to be more popular – but she also benefits from being consistently underestimated by pundits and politicos (me included, once).

Gallant and Wynne surprise me – (a) in Gallant’s case, because his New Brunswick Liberals are about double the provincial Progressive Conservatives in voter support, and (b) in Wynne’s case, because she’s dealt with some recent controversies with considerable dexterity (fundraising, autism, creepy caucus members).  Why they lag, as they do, is odd.  Any theories?

And spare a thought for Premier Ball, along the way.  It’s hard to get that unpopular that fast.  But the plucky Newfoundlander has done it!

UPDATE: And, as a smart reader pointed out, Prince Edward Island is apparently no longer a province.  Who knew? 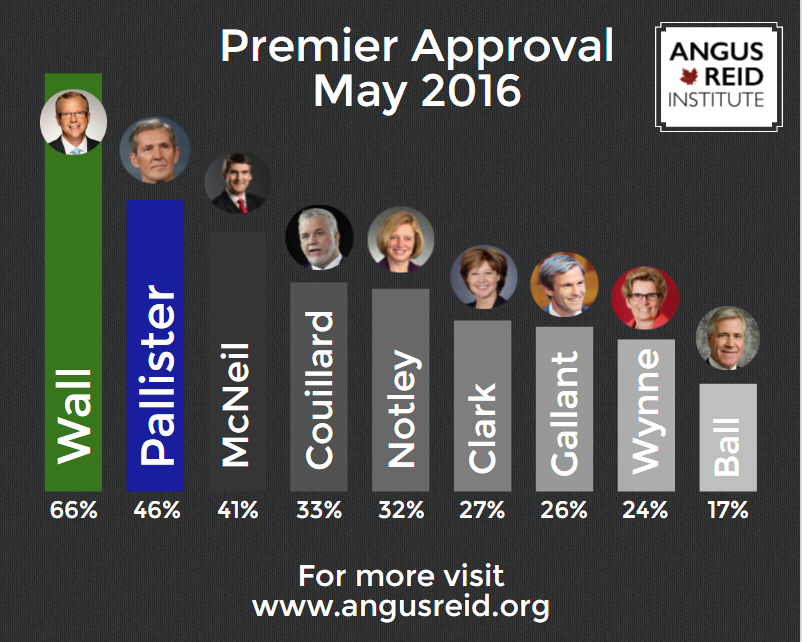