If they put a toll on political bullshit, they’d make way more money

Toronto Mayor John Tory is set to endorse a controversial introduction of road tolls on the Gardiner Expressway and Don Valley Parkway to raise $300 million a year for his cash-starved government, the Star has learned. Tory is expected to make the daring declaration in a luncheon speech shortly after the Thursday release of city staff reports recommending highway tolling, along with other so-called revenue tools including a new tax on hotel stays.

Reminded me of this: 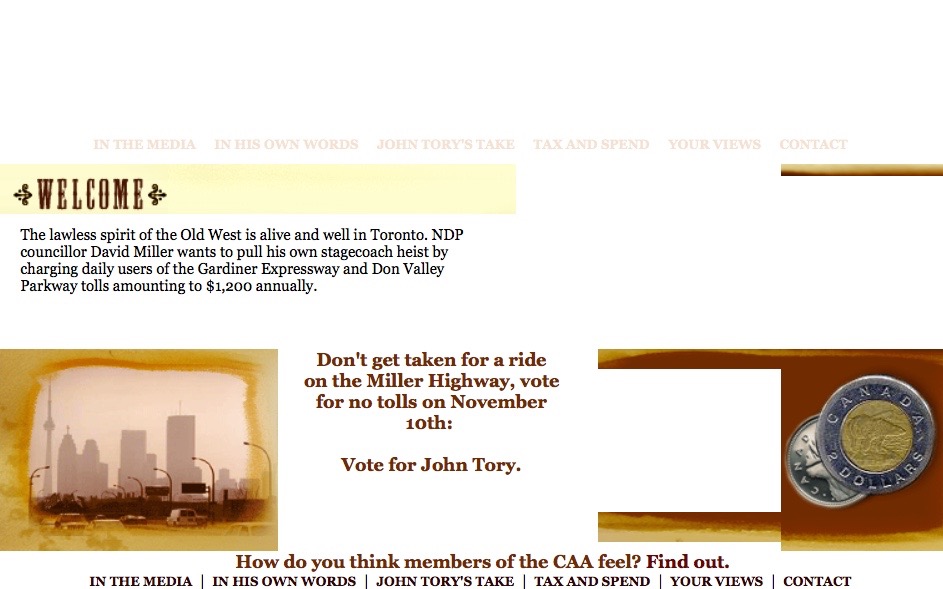 I came up with www.millerhighwayrobbery.ca in 2003, when I was helping out on John Tory’s first mayoral campaign.  He thought it was a great idea, back then.  And, once elected, Miller refused to go ahead with tolls on the DVP or Gardiner.  So I guess we won that debate.

Anyway.  I like John a lot.  And I’m sure he’ll have focus-grouped talking points ready to go on this truly whiplash-inducing flip-flop – circumstances have changed, I’m not afraid to admit when I was wrong, less than a cup of coffee a day, the alternative is the apocalypse, look at me I’m finally being decisive about something, blah blah blah – and I’m sure he’ll have some cyclists who’ll buy it, hook, line and sinker.

So, I’ll leave it to other folks to get really, really pissed off about this (and there’ll be plenty of those folks, believe me).  Me, I will simply say that (a) www.ToryHighwayRobbery.ca plus (b) the fact that SmartTrack is never, ever, ever going to happen may well lead to something else entirely in 2010.