The most powerful unelected people on Earth

That, usually, is what the most senior people around the President of the United States are: more powerful, with more influence, than any elected person anywhere.

That’s no revelation. What is a revelation, however, is that North America’s leading anti-racist organization keeps a file on those same people.

And here’s what the respected and independent Southern Poverty Law Centre has to say about the people around Trump:

The two political operatives chosen earlier this month to lead Donald Trump’s presidential campaign after two former managers departed have been members of the secretive Council for National Policy (CNP), Hatewatch has learned.

Longtime Republican pollster Kellyanne Conway and Stephen Bannon, executive chairman of the far-right Breitbart News operation, were named on Aug. 17 as, respectively, the Trump campaign’s manager and its chief executive officer. The appointment of Bannon was by far the more controversial choice, given his role at a “news” outlet known for bashing immigrants, Muslims, women and others.

The CNP is an intensely secretive and shadowy group of what The New York Times once described as “the most powerful conservatives in the country.”

[The CNP] includes people like Michael Peroutka, a neo-Confederate who for years was on the board of the white supremacist League of the South; Jerome Corsi, a strident Obama “birther” and the propagandist hit man responsible for the “Swift boating” of John Kerry; Joseph Farah, who runs the wildly conspiracist “news” operation known as WorldNetDaily; Mat Staver, the Liberty Counsel leader who has worked to re-criminalize gay sex; Philip Zodhaites, another anti-gay activist who is charged with helping a self-described former lesbian who kidnapped her daughter from her former partner and fled the country; and a large number of other similar characters.

Bannon was already controversial. His Breitbart news operation has specialized in extreme-right propaganda that is summed up in some of the headlines it ran while under his stewardship: “Bill Kristol: Republican Spoiler, Renegade Jew,” “There’s No Hiring Bias Against Women in Tech, They Just Suck at Interviews,” “Birth Control Makes Women Unattractive and Crazy,” “Lesbian Bridezillas Bully Bridal Shop Owner Over Religious Beliefs” and so on. Breitbart also recently published a defense of the “Alternative Right” that included defending well-known white supremacist ideologues Jared Taylor and Richard Spencer.

For years, I’ve written about the racist Right – books, academic work and journalism. In all of that time, the neo-Nazis and white supremacists I’ve investigated – from the Aryan Nations to the Holocaust deniers to the fringe Right to the various Klans – have always been on the outside of power, looking in. They could never figure out a way to acquire real power.

Now, it seems, they have.

What does Bannon have to say about all of this? We don’t know. His ex-wife, however – whom he is alleged to have beaten – recalled Bannon said he didn’t want his children around Jews.

And now he is about to become the most powerful unelected person on Earth.  God help us all. 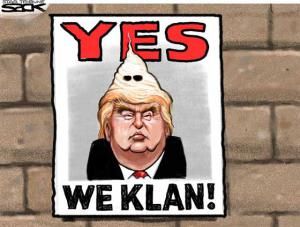