The CBC informed me, this morning, that there is a petition with many names on it about Justin Trudeau’s broken “electoral reform” promise.  Here it is.

Is it a broken promise?  Well, there’s no dancing to be done on the head of that particular pin. As I said on the regular Monk/Mills/Kinsella panel on Evan Solomon’s CFRA show yesterday – it is a broken promise, yes.  But it was the right one to break.

I’ve offered ten reasons for that in the past.  The main one, as I related to my CFRA pals, is that Canadian democracy belongs to Canadians – and self-interested politicians are not allowed to fundamentally change it without carefully, thoughtfully and methodically consulting with the people who make up that democracy, first.  That applies to all of the parties.

Anyway.  The NDP – as with all things – is brimming with outrage and piety about the broken promise.  They’re whinier than Donald Trump after being forced to watch a weekend-long Saturday Night Live retrospective.

They say Justin Trudeau is a liar, the Liberals are going to lose the next election over this, blah blah blah.  And so on.

So I (and others, apparently) got to thinking.  In the (too) many times when the Dippers have been in power, they brought in proportional representation right away, right?  I mean, proportional representation – uncharitably known, to some, as The Endangered New Democrat Species Act – is central to our very survival as a people, isn’t it?  So, what did the NDP do about it when they won power under that awful, illegitimate, undemocratic first-past-the-post system?

Well, they did nothing, actually. 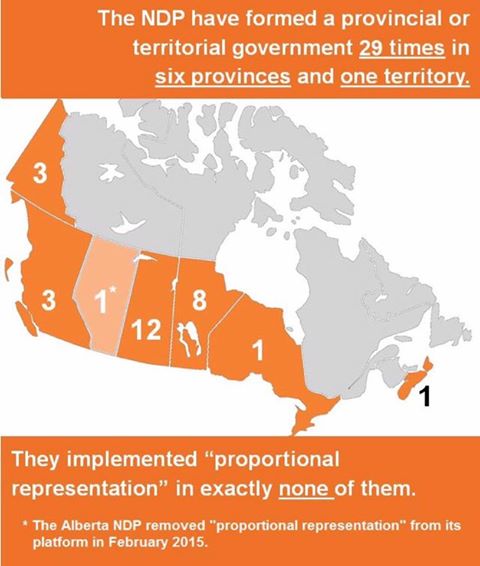