Allies in hate: Soldiers of Odin and the Jewish Defence League

The Soldiers of Odin is a rapidly-growing far-Right anti-refugee, anti-immigrant racist organization now found across Canada.  Experts call them a terror group.  More on them here and here.

The Jewish Defence League is a far-Right group that has itself been classified as extremist by the FBI for many years, and its parent organizations Kach and Kahane Chai are now officially terrorist organizations in Israel, Canada, the E.U. and the United States.  More here and here.  The JDL wasn’t always that way, as I write in Web of Hate, but it sure is now.

And now the JDL stands shoulder-to-shoulder with the Muslim and immigrant-hating Soldiers of Odin.  An organization founded by an actual neo-Nazi.

Here’s just one picture of a Canadian JDL guy with a Soldiers of Odin guy, in Toronto.  Here is a video of them causing a mini-riot at Toronto City Hall. 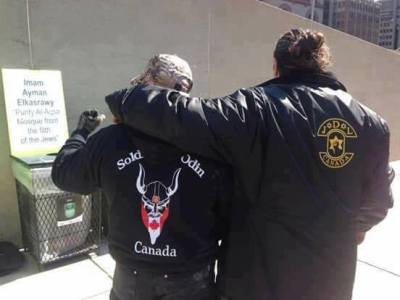 That the JDL and Soldiers of Odin are hanging out together may not be a big deal – it may even make sense. They both clearly hate Muslims and Muslim refugees.  Hateful birds of a feather, etc.

But what is significant is that the JDL and Soldiers of Odin are now scooting back and forth across international borders, despite the clear linkages to terrorism, and despite their clear willingness to commit crimes of violence.

How is that possible?  Why aren’t the authorities stopping them?  What are the police doing about it?

All good questions.  But what isn’t in question is that the Jewish Defence League and Soldiers of Odin are now united, in their shared hatred of refugees, immigrants and Muslims.

And that’s  a problem for everyone.