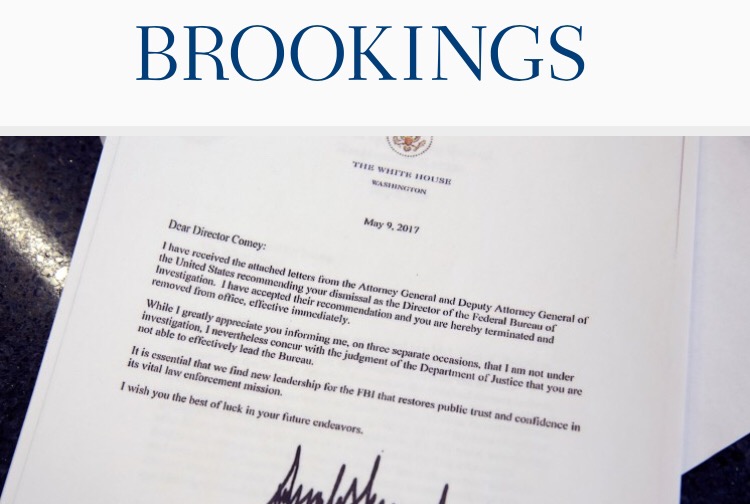 The Brookings Institute has just released a 108-page, single-spaced, fully-footnoted, tightly-reasoned indictment of Donald Trump. The whole document is here.

At the risk of spoiling it for you, here is the key part of the conclusion:

With that caveat, our review of the facts and the law leads us to the view that the president likely obstructed justice. Should that conclusion be borne out, we believe he will be held to account under one or another of the vehicles we have outlined, for no one is above the law in our system.

Accountability will have significant consequences for the functioning of our democracy. We offer this paper as a framework to evaluate the facts and the investigation as they develop, and to help prepare for the turbulence that may well lie ahead.

The key factors in getting them to that conclusion include multiple, multiple violations by Trump (or his criminal underlings) of key federal obstruction of justice statutes.

Say Brookings’ guys: “Trump may be liable for intimidating, threatening, and corruptly persuading Comey in order to influence, prevent, or delay his testimony or cause Comey or others to withhold testimony from congressional or grand jury proceedings even if his “words did not contain overt threats.”

What is most striking about their analysis, when you read it, is the astonishing amount of evidence there is in support of obstruction charges. There is a mountain of it. With Trump, because he says and does outrageous things so often, it is easy to forget what he did just a few days ago.

What Brookings has done is assemble just the known facts, of which there are many – and then subject those many facts to rigorous, careful legal analysis. When they do that, you will agree the conclusion is pretty unsurprising. And they don’t even include the many facts that those of us outside of Mueller’s team don’t know.

Reading this, it seems impossible to me that special counsel Robert Mueller is not going to return indictments against Trump and his cabal. Reading this, too, you would understand why the Unpresident would start issuing pardons for his cronies and his family members sometime soon.