Carleton U. reports on on this week’s lecture 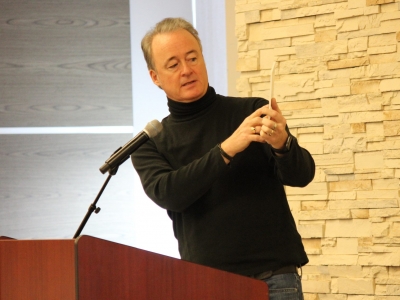 Carleton alumnus Warren Kinsella returned to his alma mater on Thursday, November 30 for a public lecture on the rise of the far-right in the Trump/Brexit era.

Warren Kinsella gave a public lecture at Carleton this week on “The Rise of the Far Right in the Trump/Brexit Era: Lessons for Political Communication.”
Kinsella, who worked as a communications strategist on election campaigns for Hillary Clinton and Jean Chrétien, discussed the recent surge in anti-immigrant and anti-refugee sentiment in Western democracies and the implications for political communications.

“The beast is awake,” said Kinsella on the rise white supremacist and neo-Nazi movements across the country, a worrying trend which he described as “just the tip of the iceberg” given the lack of statistics on hate crimes in Canada.

Kinsella, who completed his Bachelor of Journalism at Carleton, warned that journalists need to avoid softening their language when reporting on these movements.

In answer to the question of how individuals can take action and fight far-right movements, Kinsella advocated for getting off social media and getting involved in local politics.

Following his lecture on campus, Kinsella spent the afternoon at Octopus Books to celebrate the release of his latest book, Recipe For Hate, which provides a fictionalized account of the clash between progressives and organized racism.

Kinsella’s breakfast talk was co-organized by the Communication & Media Studies Program, Department of Political Science and the Clayton H. Riddell Graduate Program in Political Management, with support from the Office of the Dean, Faculty of Public Affairs.